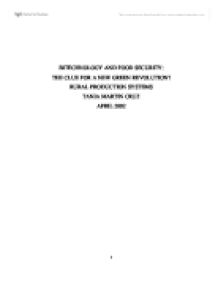 Bi technology and food security: The clue for a new green revolution?

BITECHNOLOGY AND FOOD SECURITY: THE CLUE FOR A NEW GREEN REVOLUTION? RURAL PRODUCTION SYSTEMS TANIA MARTIN CRUZ APRIL 2002 INTRODUCTION Biotechnology is a new revolution; it has the power to modify DNA in living organisms in order to achieve the required results. With biotechnology genetic engineering has reached a powerful status, it means that human beings can adapt living organisms to their necessities or desires. My goal has been to analyse biotechnology and specifically Genetic Modified Crops (GM crops), to know if they can be the tool for a New Green Revolution. A revolution that will be able to provide food security to the poor in developing countries, to use the potential benefits of biotechnology to prevent hunger and poverty, to improve the nutritional status of food or make them adaptable to specific weather conditions among other properties. To achieve this I have analysed the principal points of view about biotechnology, their objectives, benefits and risks and from this I have developed my own arguments about biotechnology and food security. My assumption and the arguments given are addressed to demonstrate that biotechnology could be a potential tool to improve food security but the actual companies being managed to develop researches on biotechnology are not considering food security as one of the main goals, on the contrary, they are adapting biotechnology to their own interests and just seeking economic profit. Biotechnology is focused, then, on developing disease and virus resistant, long shelf life and pesticides properties in their products: even if they can be useful in developing countries, they are not their main concern. The necessities of the poor are not being taken into account. Furthermore, biotechnology can be used, as the Green Revolution was, as a weapon to widen the gap between the poor and the rich, between developed and developing countries: It offers many advantages to the companies that research biotechnology: to impose dependency on it thanks to the issue of IPR's and the concession of patents to be able to use their products. ...read more.

For example the consolidation of seed companies with chemical companies breeds a conflict of interest which has the propensity of working against farmers. In several instances, the company that is genetically engineering this new crop is financially controlled by a parent chemical company like Montsanto; therefore GM crops will be dependent on herbicides suited to the brand of herbicide being produced by the chemical company. New forms of domination and manipulation are emerging with biotechnology. According to D. Parker and D. Zilberman, embodied products, that is luxury goods sustained by private research and monetary incentives are more important for these powerful companies than disembodied products or necessary goods with inelastic demand (1993:96). Several of these companies are also funding researches in different universities: Montsanto, for instance, has given over $50 million to Harvard, Washington and Rockefeller Universities and is building a $150 million life science complex. Hoechst, a giant German chemical company, has given Massachusetts General Hospital $70 million to do research in genetics. Often, these contracts have stipulations on confidentiality of information, it demonstrates that the results of researches are not addressed as a public benefit as food security but tend towards plant patents and breeders rights (Perlas, 1994:78). Uncertainty, therefore, exists about the contribution of GM crops to assure food security. Secondly little research by private industry has focused on developed countries food crops other than maize and for limited work on rice and cassava, little biotechnology research have been developed to focus on productivity and nutrition of poor people. The Rockefeller Foundation's agriculture program is one of the few examples: in 1998 it provided about $7.4 million for biotechnology research relevant to developing countries with emphasis on rice (Modern biotechnology for food and agriculture, www.cgiar.org ). The private sector involved in biotechnology focuses their researches on crops that can provide sufficient returns to cover costs, needs of small farmers are, then, unlikely to be considered. ...read more.

Incentives offered by companies to persuade farmers to replace their traditional crops with cash crops can also be a threat to biodiversity. The solutions M. Lipton (Reviving global poverty reduction) draws to address food security in biotechnology research are the following: -To work with the half dozen developing countries NARS's with substantial GM research capacity to design and finance a major expansion around agreed crops, regions, traits and types of farm target. The problems are that huge financial input is needed and difficulties can arise with excluded countries. -The second one is to build on big GM firms' need for better public image and their growing recognition that current arrangements for GM research are not working globally, one route could be to work with the public sector and to offer substantial prices for developing specific varieties. -The third approach is to build on the practice of at least one of the GM giants of attracting scientists by allowing them to use a part of their time for self-prioritized research using company real capital. CONCLUSION The arguments given above suggest that, despite the potential benefits that biotechnology can offer to India and all developing countries, it is necessary to change direction to become a powerful tool to fight against poverty and improve food security and nutrition. Is this, then, the clue for a new revolution? Arther Kornberg, Nobel Laureate, stated:" Much has been said about the future impact of biotechnology on industrial development, but this does not yet apply to the less developed countries that lack this infrastructure and industrial strength. In view of the current power of biotechnology and its even brighter future, there is no question that the less developed countries must now position and strengthen their status in biotechnology...what a tragedy it would be if these enlarged concepts of genetic, biology and chemistry were available only to a small fraction of the world population located in a few major centres of highly developed countries". (India: biotechnology research and development, www.gapresearch. ...read more.