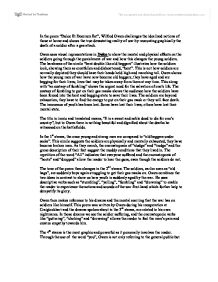 In the poem "Dulce Et Decorum Est", Wilfred Owen challenges the idealized notions of those at home and shows the true devastating reality of war by recounting graphically the death of a soldier after a gas attack. Owen uses visual representations in Dulce to show the mental and physical effects on the soldiers going through the punishment of war and how this changes the young soldiers. The harshness of the simile "bent double like old beggars" illustrates how the soldiers look, showing them as crestfallen and disheartened, "bent". This is not how soldiers are normally depicted they should have their heads held high and marching tall. Owen shows how the young men of war have now become old beggars; they have aged and are begging for their lives; lives that may be taken away from them at any time. This along with "an ecstasy of fumbling" shows the urgent need for the salvation of one's life. The ecstasy of fumbling to put on their gas masks shows the audience how the soldiers have been forced into the bent and begging state to save their lives. The soldiers are beyond exhaustion, they have to find the energy to put on their gas mask or they will face death. The innocence of youth has been lost. Some have lost their lives; others have lost their mental state. The title is ironic and translated means, "It is a sweet and noble deed to die for one's country", but to Owen there is nothing beautiful and dignified about the deaths he witnessed on the battlefields. In the 1st stanza, the once young and strong men are compared to "old beggars under sacks". This simile suggests the soldiers are physically and mentally exhausted, they have become broken men. As they march, the onomatopoeia of "sludge" and "trudge" and the grose description of their feet suggest the muddy conditions that they lived in. ...read more.

Owen presents the reader with "- O what made fatuous sunbeams toil to break earth's sleep at all?" This was a deliberate technique used by Owen. Although this question was fuelled with, at the time, grief, confusion, anger and sadness, it is still a question that remains un-answered today. It leaves the reader thinking and consumed in his world of poetry. As Futility questioned the meaning of life, Owen's poem The Last Laugh can somewhat backup his on-going question as this poem describes 3 soldiers who all exclaim three different comments and yet all meeting the same fate: Death. As mentioned, the three soldiers all have their own stanza. The first opens with "'O Jesus Christ! I'm hit,' he said; and died." The second line addresses whether he meant it religiously or if it was blasphemes, either way it doesn't matter, we find out in the first line that he died. The rest of the stanza continues in suggesting the many ways he could have died. "The bullets chirped - in vain! Vain! Vain!" In this sentence alone, Owen has used to techniques. The first is personification; the whole poem, including the title revolves around personification. The title, The Last Laugh, is in fact talking about the machinery and weaponry of war, suggesting at the end of the day, in the battle of man versus machine, machine will always win. In this context, Owen says that the bullets "chirped". The second he uses is repetition. This helps to emphasize the non-stop firing of the guns, and this is again emphasized in the next line where it's said: "Machine-guns chuckled - tut-tut! Tut-tut!". The second stanza, like the first contains personification. This time, after the soldier helplessly cries to his mother and father, he "Then smiled, at nothing, childlike, being dead". After the shrapnel cloud has done its designed job of killing the young soldier, it then "Leisurely gestures" the soldier calling him a fool. ...read more.

This coupled with the present participle, "...ing" make the poem powerful to the reader showing that the scene is not in the past, it's happening now, putting the reader at the scene of the horror and illustrates the urgency and death of the battlefield. Owen used this to convey his message to the home front, to show the effects of war through the harshness of his language, depicted with the loss of innocent life within our society. Owen uses onomatopoeia in Anthem through "stuttering rifles rapid rattle" this line demonstrates the continuing slaughter of men. The use of the word 'rapid' infers not only the speed of the guns but the speed of which lives are being taken away. The use of onomatopoeia is also used in conjunction with alliteration in the "rifles rapid rattle". This line depicts the sound of the guns. Also how the line not easily orated, and this implies that it is a hard time, a time of disparity. The sounds of guns fire also replaces the grieving people you would normally find when a death occurs. Owen significantly changes the audience's opinion of the war showing that there is no time to grieve when people are dying quicker than a gun can fire. Through the use of harsh consonants in his language, Owen conveys his message of hardship for soldiers during war, the loss of innocent lives, the reality of the battlefield and the horror and savagery of war. In conclusion Wilfred Owen uses many complex themes that show the world the significant horrors of war, major losses of war and the disparity of the battlefield and the effects of war at home. Throughout "Dulce et Decorum Est" and "Anthem for Doomed Youth" Owen has shown several techniques to justify his arguments to the audience and what has just been illustrated to you. Based on the crux of the arguments presented, I trust that Wilfred Owen will be included into the War Poet's Hall of Fame. Thank you ...read more.