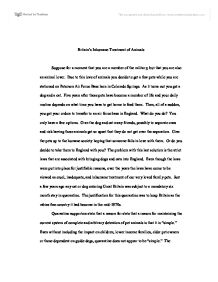 Britain's Inhumane Treatment of Animals Suppose for a moment that you are a member of the military, but that you are also an animal lover. Due to this love of animals you decide to get a few pets while you are stationed on Peterson Air Force Base here in Colorado Springs. As it turns out you get a dog and a cat. Five years after these pets have become a member of life and your daily routine depends on what time you have to get home to feed them. Then, all of a sudden, you get your orders to transfer to an air force base in England. What do you do? You only have a few options. Give the dog and cat away friends, possibly to separate ones and risk having these animals get so upset that they do not get over the separation. Give the pets up to the humane society hoping that someone falls in love with them. Or do you decide to take them to England with you? The problem with this last solution is the strict laws that are associated with bringing dogs and cats into England. Even though the laws were put into place for justifiable reasons, over the years the laws have come to be viewed as cruel, inadequate, and inhumane treatment of our very loved family pets. ...read more.

The application form requires a description of the pet, the owner's addresses at home and abroad, and proof of quarantine arrangements. Again, the importation of the pets is at the risk of the owner. If the animal were to die during quarantine then the vet used by the kennel is told to decapitate the pets, have their bodies cremated, and forward their heads and necks to be analyzed elsewhere to make sure that rabies had not been on the premises. All of this to be done without reference to cause of death. So had one's beloved pet who may be known to have accidentally choked to death on a piece of food is, according to Ministry's guidelines, to be hacked up, studied for rabies, burned, then tossed away. If the pet owner obtains the necessary information, completes the required forms and all are received in good time, an import license will be issued and sent by the Ministry to the carrying agent specified on the owner's application. As soon as a pet's airline, flight number and arrival time have been established, this information should be forwarded to the carrying agent, as many require one or more weeks notice prior to a pets prescribed arrival date. ...read more.

The change in the quarantine rules means British pet owners will be able to take their animals with them without having to worry about putting them into quarantine upon returning home. This also means that pet owners from qualifying countries can travel to Britain with their pets as long as they can prove the animals are free of rabies. For a long time, the six-month quarantine law was defending in farming, medical and veterinarian circles-and, of course, by the owners and operators of Britain's numerous quarantine kennels. Supporters argue that Britain has been rabies-free for the past 30 years. Other arguments for the status quo include assertions that the rabies vaccine had been known to fail; that Britain, with its huge urban fox population, risked having any infected foxes pass on rabies to dogs; and that other European countries were less stringent about vaccination and certification standards than Britain. The pressure for change, however, proves to be too powerful and the pro-quarantine lobby will dwindle, citing scientific advances as the reason for their change of heart. By the end of the year-long pilot program, campaigners hope to see it extended to include other pets and other countries. So for the military personnel/pet may be an alternative to giving up your pets or putting them in quarantine soon to come. As can be seen quarantine has been proven to be the cruelest treatment of pets that just want to stay with their owners. ...read more.