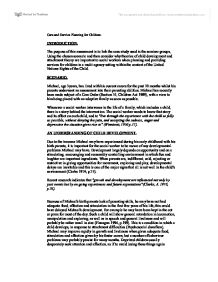 Care and Service Planning for Children.

Care and Service Planning for Children. INTRODUCTION. The purpose of this assessment is to link the case study used in the seminar groups, Using the chosen scenario and then consider why theories of child development and attachment theory are important to social workers when planning and providing services for children in a multi-agency setting within the context of the United Nations Rights of the Child. SCENARIO. Michael, age 3years, has lived with his current carers for the past 10 months whilst his parents underwent an assessment into their parenting abilities. Michael has recently been made subject of a Care Order (Section 31, Children Act 1989), with a view to him being placed with an adoptive family as soon as possible. Whenever a social worker intervenes in the life of a family, which includes a child, there is a story behind the intervention. The social worker needs to know that story and its effect on each child, and to "live through the experience with the child as fully as possible, without denying the pain, and accepting the sadness, anger and depression the situation gives rise to" (Winnicott, 1956 p.17). AN UNDERSTANDING OF CHILD DEVELOPMENT. Due to the traumas Michael may have experienced during his early childhood with his birth parents, it is important for the social worker to be aware of any developmental problems Michael may have. Development largely depends on opportunity and on a stimulating, encouraging and reasonably controlling environment in which fun and laughter are important ingredients. When parents are, indifferent, cold, rejecting or restrictive in giving opportunities for movement, exploring and play, developmental delays are inevitable and this is one of the major signs that all is not well in the child's environment (Clarke 1976, p.75). Recent research indicates that "growth and development are influenced not only by past events but by on going experiences and future expectations"(Clarke, A. 1976, p.76). ...read more.

Bowlby (1969), also claimed that an infant displays a strong innate tendency to be "attached" to one particular individual (this need not be the natural mother) and this form of attachment is different to any subsequent kind (Bowlby's Monotropy Theory). Studies by Schaffer and Emerson (1964) support the idea that a child's attachments are not equal and that a hierarchy exists. Bowlby also argued that, a child's relationship with its mother, is somehow altogether different from others. He claimed, that the maternal bond could not be broken in the first years of life, without causing serious and permanent damage to emotional, intellectual and social development (Bowlby, 1951). He called this breaking of the mother-child bond, "Maternal Separation." Bowlby argued that, the separation anxiety experienced by children, had to do with their emotional rather than physical experiences. Rutter, (1972), later made the important point that, the effects of bond disruption (maternal separation), and failure to form bonds (maternal deprivation), are different. If maternal bonding theory were correct, it would not be possible for foster parents to form necessary attachments to "their" children, whom they would not have seen as babies at all (in the majority of cases). It is the process of bonding that forms the basis for attachment in later life. I feel that the use of a single concept is wholly inadequate, as there are many modifying influences (supported by empirical research) which determine the consequences for the child. These include: * s*x (Stacey et al., 1970). * Age (Schaffer and Callender, 1959). * Temperament (Stacey et al., 1970). * Previous separation experiences (Vernon et al., 1965). * Previous mother/child relationship (Vernon et al., 1965). * Duration of separation experience (Heinicke and Westheimer, 1965). * Separation experienced within a strange environment (Douglas and Blomfied, 1958). Evidence of having understood attachment theory when planning for children in your chosen service area When children enter foster care, they have to cope with two things. ...read more.

listen and show interest. What the child has to say is important to the child, and is not necessarily irrelevant. Use any stories the child talks about as an aid to your communication. It is important to work hard to understand the child, but do not interrupt at the time if some word doesn't make sense to you. It may be possible to get the overall meaning, or the worker could check with someone who understands without putting the child under pressure. This other person in the case of Michael could be his foster carer or any other significant other in Michael's life who was in the room. Michael may be clear about friendship and about people he can trust. But he may be wary of people he doesn't know, and may be reluctant to communicate with them. With those Michael knows and can trust he may be confiding and affectionate. A child of 3yrs may say 'I don't like you' simply because they don't know you. The worker must take their time through several meetings, to build trust between Michael. In the scenario there was not any mention to whether Michael was black, spoke a different language, or presented any learning disabilities. In this case the appropriate communication skills would need to be addressed. It is important to be clear in your mind as the worker your duties and the rights of the child are not undermined because of the difficulties in communicating. These rights and duties might include: Your duty under S.I. (3) of the Children's Act 1989 to ascertain the child's own wishes and feelings. The child's right under S.4. (4) to information in a form they can understand. The appropriateness in some circumstances of independent representation. It is very important that the worker show's that they value the child, respecting their own experiences, background culture and language. Conclusion. Attachment theory has helped workers understand how and why children develop close bonds with caregivers. It has also provided a framework that enables workers to understand the importance of psychological development through attachment and the implications if they don't. ...read more.