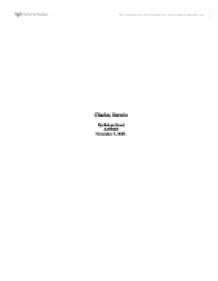 Charles Darwin By:Robyn Good A233685 November 5, 2003. Charles Darwin pioneered the path for evolution. Darwin was born in 1809, in Shrewsbury. He was born to a distinguished family of doctors and his grandfathers were the leading scientific figures of their time. Eramus, who was Darwin's paternal grandfather inspired and influenced Darwin to become a great scientist too. Darwin would eventually challenge the traditional views of his time. He pioneered the universal theory of evolution and gave the best explanation on how evolution works.1 Darwin developed the theory of natural selection, which he argued was the key mechanism of evolution. Darwin's early education did not inspire him and he was quite bored with his studies. In 1818, Darwin entered the Shrewsbury school for seven years. There he was taught an education that was mostly composed of classical subjects. Darwin did not enjoy his time at the school and thought the education he received did not help develop his mind.2 In 1825, he left the school to attend the University of Edinburgh to study Medicine. After two years Darwin left the University because he found little interest Medicine. Darwin enjoyed nature a great deal more. The only meaningful thing that came out of his studies at Edinburgh was his introduction to the theories of Lamarck that Darwin would later correct. ...read more.

9 On each island the forms of tortoise, finch, and mockingbirds were related, yet different in structure and eating habits. At the time, Darwin did not fully understand what he had come across, however he started to realize his observations gave doubt to popular belief that species were individually created and did not evolve. In latter years this discovery would lead him to the theory of evolution. After his return to London in 1836, after five years Darwin decided to focus and research the specimens he had come across. He gave the specimens to various specialists to examine and started to find facts of variation that he had seen while on the Beagle. Darwin studied the domestication of animal and he noticed that variation did occur. In light of his findings around the spring of 1837, Darwin started to believe in the idea of evolution. A year after while reading Malthus' Essay on the Principle of Population he would figure out the mechanism of evolution and the principle of natural selection.10 However, Darwin would not publish his theory for another 20 years. In 1839, he published his observations on the Beagle and by 1845 the entire Geology of the Beagle had been published. In the years before the publication of his most famous work, The Origins of species Darwin wrote about the findings he had found on the Beagle. ...read more.

From 1861 to 1868, Darwin worked on new editions on the Origins of Species. Darwin went on to publish The Variation of Animals and Plants under Domestication in 1868. In the book he struggles with the problem of how genetic variation emerges.18 In 1871, Darwin published his second greatest work The Descent of Man, and Selection in relation to s*x. Its aim was to show man's genealogical connection with the animal kingdom.19 He highlighted man's descent from an ancestor related to the Catarrhine monkeys. He also tried show examples of evolution for humans and to show we have been subject to natural selection also. In 1872, he published The expression of the Emotion in Man and Animals. He argued that facial muscles were created for the purpose of expressions. In Darwin's last years he wrote his autobiography (1876) and his last book The formation of Vegetable Mould, through the Action of Worms, with Observations on their habits (1881). Darwin highlights the importance of these creatures through geological history. Darwin never stopped his studies, but he became ill by an illness that followed him throughout his life and he died April 29, 1888. Darwin changed the thought of his time and pioneered the way for future geologists and naturalists. Darwin was a man that inspired the young intellectuals of his time and threatened the conservative older professionals of his time. Yet, most came to accept his evolutionary theory. Darwin is remembered as one of the most controversial figures of his time. ...read more.