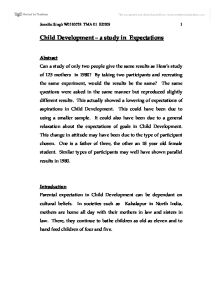 Child Development - a study in Expectations

Child Development - a study in Expectations Abstract Can a study of only two people give the same results as Hess's study of 125 mothers in 1980? By taking two participants and recreating the same experiment, would the results be the same? The same questions were asked in the same manner but reproduced slightly different results. This actually showed a lowering of expectations of aspirations in Child Development. This could have been due to using a smaller sample. It could also have been due to a general relaxation about the expectations of goals in Child Development. This change in attitude may have been due to the type of participant chosen. One is a father of three, the other an 18 year old female student. Similar types of participants may well have shown parallel results in 1980. Introduction Parental expectation in Child Development can be dependant on cultural beliefs. In societies such as Kahalapur in North India, mothers are home all day with their mothers in law and sisters in law. There, they continue to bathe children as old as eleven and to hand feed children of four and five. In another society, Orchard Town, the mothers are again home all day but alone with pre-school children. They teach them early to feed themselves. They also teach self reliance in play and cleanliness habits. However, they may postpone teaching adult skills. ...read more.

The scores were then transferred to the Summary Data Sheet (attached as resource C.) These were totalled and then divided by the number of categories in that group. These were then transferred to Table A (below) for comparison with the Hess test. Table A The developmental goals of four samples of adults Japanese mothers US mothers OU UK mothers Participant one Participant two Emotional maturity 2.49 2.08 1.84 1.2 1.2 Compliance 2.24 2.04 2.18 2.2 2.5 Politeness 2.49 2.3 2.61 2.5 1.5 Independence 2.13 1.92 1.73 1.6 1.3 Social Skills 1.87 2.18 2.08 1.6 1.3 Verbal assertiveness 1.73 2.18 2.17 2 1.6 This information was also illustrated as a graph (attached as Resource D). this is called the Data Profile Sheet. It shows the difference in answers between participant one, two, and the pilot. However, the pilot is not included in Table A nor is referred to in the analysis of the data. In general, both participants had the lowest expectations of developments goals. Emotional maturity had the highest expectation of the Japanese mothers, yet had the lowest of both participants. When asked the question " what did you base your answers on?" participant one responded that she had based it on her younger siblings. Participant two remarked he had based his answers on his own children. Neither mentioned child care books or magazines. When asked "did you have any difficulties with any of the questions?" ...read more.

It was a difficult theory to prove with such a small number of participants but it was interesting to note the results. As mentioned before, it is difficult to know whether the participants were truthfully answering the questions or trying to make the study more interesting or intellectual. It may have been better for the participant to be unaware of what the experiment was about until afterwards. This would prevent subconscious influence on the outcome. If the experiment done again it may be better to have a wider more cross culture survey to see the difference that culture makes. It was a concern that the interviewer may have an influence in that interpretation of some of the cards may have made a difference. Would the results have been different if the card scoring had been done by a different person. Perhaps they would have been better to have done the test unobserved. Conclusion The findings of the study are that it is not possible to reproduce the Hess study of 1980 with only two people. Especially when the two people are of a different group to the original report. The results reflected a relaxation of goal attainment. But the results may be flawed, two is not an ideal number. Plus although the report was as close to Hess's as possible it may have been compromised by the participants answering in an unrealistic way. Both were aware of the analysis being used for an OU assessment and this may have affected their answers. ...read more.