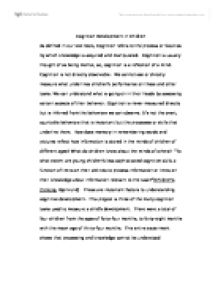 Cognition Development in Children As defined in our text book, Cognition refers to the process or faculties by which knowledge is acquired and manipulated. Cognition is usually thought of as being mental, so, cognition is a reflection of a mind. Cognition is not directly observable. We cannot see or directly measure what underlines children's performance on these and other tasks. We can understand what is going on in their heads by assessing certain aspects of their behavior. Cognition is never measured directly but is inferred from the behaviors we can observe. It's not the overt, countable behaviors that is important but the processes or skills that underline them. How does memory in remembering words and pictures reflect how information is stored in the minds of children of different ages? What do children know about the minds of others? "To what extent are young children's less sophisticated cognitive skills a function of limits on their abilities to process information or limits on their knowledge about information relevant to the task?"(Children's thinking, Bjorklund) These are important factors to understanding cognitive development. This project is three of the many cognition tasks used to measure a child's development. There were a total of four children from the ages of forty-four months, to forty-eight months with the mean age of thirty-four months. This entire experiment shows that processing and knowledge cannot be understood independently of one another. "How a person of any age processes information is a function of the prior knowledge that a person possesses. ...read more.

Cognitive inhibitions refer to the ability to inhibit certain thoughts and behaviors at specific times. With theory of mind, many tasks require children to inhibit a dominate response to pass the task. Task C For this experiment we invite the child to play a memory game. Showing each card, the child has to name it and we remind them to remember it. After the child sees all nine pictures, we asked the child to name them back to us. Each child had different results. Two of the children did better on the second test, then the first. One did the same on both and one did better on the first and poorer on the second. There was one child, subject B2AP who had evidence of clustering on the second trail and recalled the most pictures out of all subjects on that test. Older children spontaneously sort words into groups during the study period, and at recall tend to remember the words from the same category together. This is a form of organization in memory and "refers to the structure discovered or imposed on a set of items that is used to guide subsequent performance" (Children's Thinking, Bjorklund). Developmentally, levels of recall and clustering usually increase with age, "with preschool children's clustering often at chance levels" (Children's Thinking, Bjorklund). Young children are capable of organizing information for recall, but they generally fail to do so spontaneously. In most condition, young children fail to generalize the strategy to new situations or new sets of material. ...read more.

I did find it interesting that all subjects recalled the horse picture and three out of the four subjects recalled the dog picture. Comparing task C to task A I think that to be able to pass task A, the subject must pass the false-belief task (task A), and in order to pass task A the child must have a strong knowledge base resulting in faster processing for domain specific information, which results in more efficient processing and greater availability of mental resources. The amount of knowledge one possesses influences how new information is stored and integrated into one's previous knowledge and the speed and efficiency with which information is processed (Children's Thinking, Bjorklund). Cognition, then, acts in a domain-general mechanism. Individual items are more richly represented in the semantic memories of older children than in those of younger children, resulting in greater ease of retrieval. What is important to remember is that what and how much one knows influences how and how well one thinks. With age, children acquire more knowledge and, as a result of these quantitative increases, process information differently. Young children's event memory is based on scripts, a form of schematic organization with real-world events organized by their casual and temporal characteristics. Children's early memories are for general routines and not for specific autobiographical experiences. Parents, care takers and older siblings teach children how to remember by interacting with them and providing the structure for putting their experiences into narratives. Without the above, the three tasks would be impossible. Reference Bjorklund, David, F. (2005) Children's Thinking, Cognitive Development and Individual Differences.4th Ed. Wadsworth and Thomson Inc. Cognition Development in Children Laura Harris ...read more.