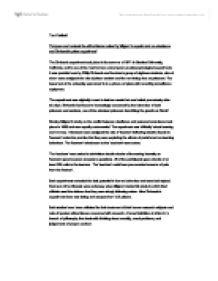 'Compare and contrast the ethical issues raised by Milgram's experiments on obedience and Zimbardo's prison experiment'.

Tom Fairfield 'Compare and contrast the ethical issues raised by Milgram's experiments on obedience and Zimbardo's prison experiment' The Zimbardo experiment took place in the summer of 1971 in Stanford University, California, and is one of the most famous contemporary social-psychological experiments. It was presided over by Philip Zimbardo and involved a group of eighteen students, nine of whom were assigned the role of prison warders and the remaining nine as prisoners. The basement of the university was turned in to a prison complete with recording surveillance equipment. The experiment was originally meant to last two weeks but was halted prematurely after six days. Zimbardo had become increasingly concerned by the behaviour of both prisoners and wardens, one of the volunteer prisoners describing the guards as 'Nazis'. Stanley Milgram's study on the conflict between obedience and personal conscience took place in 1965 and was equally controversial. The experiment was 'officially' about learning and memory. Volunteers were assigned the role of 'teacher' delivering electric shocks to 'learners' under the premise that they were exploring the effects of punishment on learning behaviour. The 'learners' unbeknown to the 'teachers' were actors. The 'teachers' were asked to administer electric shocks of increasing intensity as 'learners' gave incorrect answers to questions. All of the participants gave shocks of at least 300 volts to the learners. ...read more.

Symptoms were observed that were similar to those of a nervous breakdown. It is certain that volunteers in both experiments suffered psychologically and in the case of Zimbardo's experiment physically. Being led to believe that you are giving near fatal electric shocks to people and cleaning the inside of a toilet bowl with bare hands are both traumatic. The rebellion started by inmates in Zimbardo's experiment was put down with the use of carbon dioxide fire extinguishers. The longevity of both experiments itself poses an ethical question; Milgram's experiments went ahead even when 'the pattern of reluctant and pained obedience began to emerge'. Zimbardo admitted that, 'although we ended the study a week earlier than planned, we did not end it soon enough'. This raises the question of whether some form of independent monitor is ethically necessary in such experiments. Zimbardo's experiment had already been viewed by many people in his department and from other outsiders, however it was only when Professor Christina Maslach observed the experiment that Zimbardo heard moral objection to it. Maslach has explained that the circumstances of her disapproval were that she was both romantically involved with Zimbardo and not working for him as a graduate student or colleague. If these explanations for her behaviour are to be given credibility, Zimbardo's staff are also worthy of a study in obedience. ...read more.

11) Although sociologists, like other researchers are committed to the advancement of knowledge, that goal does not, of itself, provide an entitlement to override the rights of others. This last point generally covers the ethical dilemma that surfaces when research in the nature of Milgram and Zimbardo's is undertaken. Do the means justify the end? The theoretical Utilitarian response to Milgram's work would be a positive one. For the experiments could be interpreted as benefiting the many at the expense of the few. This conforms to the utilitarian basic principle of 'greatest happiness for the greatest number'. Therefore the psychological pain, which the volunteers went through, was necessary to benefit the rest of society. This is a difficult theory to accept however as it can be attributed to all scientific research which would benefit everybody. Perhaps tellingly this can be related back to the original inspiration of Milgram's research, the treatment of Jews in the Second World War. Experiments carried out on Jewish prisoners in the war benefited the advance of science greatly. However very few people would see the pain and suffering of these people as a valid sacrifice for the benefit of wider society. I will conclude this essay with the thoughts of Zimbardo: "The ethical point is legitimate insofar as whom are you, as an experimenter, to give a person that kind of information about oneself. But my feeling is that that's the most valuable kind of information that you can have � and that certainly a society needs it. ...read more.