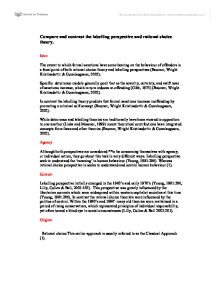 Compare and contrast the labelling perspective and rational choice theory.

Traditionally deviant activity means those actions contrary to the norms whether discovered or not. Labelling draws a distinction between rule breaking and deviance with deviance being that rule breaking that is discovered and labelled. Labeling departs from the view above. This for the most part is a departure from positivism, a suspicion of 'social facts' and a denial that human behavior is totally determined by society. The social action approach in sociology, of which labeling is a part, is much more concerned with meaning(why questions) rather than with positivism's concern with the extent of phenomena(what, or how much questions). Labeling theorists tend to be uninterested in what 'causes' a person to act in a way defined as deviant. They are more interested in what happens when a person is perceived as a deviant-the focus is on the interaction between the deviant and those who define him/her as deviant. "Social groups create deviance by making the rules whose infraction constitutes deviance, and by applying those rules to particular people and labeling them as outsiders. ...read more.

Stones, 1996, 40) than rational choice theories generally promise to tell us (Sparks, 1997). Contribution Crime, shame and reintegration Reintegrating law breakers by shaming the offence without permanently stigmatizing the offender (Baumer, Wright Kristinsdottir & Gunnlaugsson, 2002) Conclusion Although both rational choice and labelling are primarily considered agency perspectives there are stark differences between them, showing how much diversity can be found in concepts human interaction and agency. To consider these perspectives on their own may not really have great use when studying crime and criminology as a whole. Their real importance is as foundation for further study their biggest contribution is when they are incorporated into other theories such as Braithwaite's theory of crime, shame and reintegration. The labelling theory perspective is indicative of a change of thought in the sixties and such is crucial to the field of criminology as it may have stagnated without it. It is of course imperative to see theories or perspectives within their historical and political perspectives. Both these perspectives are obviously child of their times. ...read more.