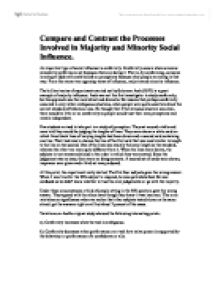 Compare and Contrast the Processes Involved in Majority and Minority Social Influence.

Compare and Contrast the Processes Involved in Majority and Minority Social Influence. An important type of social influence is conformity. Conformity occurs when someone voluntarily performs an act because others are doing it. That is, by conforming, someone is acting at odds with one's beliefs or perceptions because other people are acting in that way. From this stems two opposing views of influence, majority and minority influence. The brilliant series of experiments carried out by Solomon Asch (1952) is a great example of majority influence. Asch was not the first investigator to study conformity, but his approach was the most direct and dramatic. He reasons that perhaps conformity occurred in only rather ambiguous situations, when people were quite uncertain about the correct standard of behaviour was. He thought that if the stimulus situation was clear, there would be little or no conformity as people would trust their own perceptions and remain independent. Five students arrived to take part in a study of perception. They sat around a table and were told they would be judging the lengths of lines. They were shown a white card on which three black lines of varying lengths had been drawn and a second card containing one line. ...read more.

People conform for basically two reasons, the desire to be right which is called informational influence and the desire to be liked which is normative influence. Informational influence is the degree that people are influenced because they accept the other subjects as sources of information about the word. Our tendency to conform based on informational influence depends on two aspects of the situation : how well-informed we believe the group is and how confident we are in our own independent judgement. The more we trust the group's information and value their opinions in a situation, the more likely we are to go along with the group. Anything that uncrosses confidence in the correctness of the group should increase conformity, and conversely, anything that leads us to doubt the group's knowledge or trustworthiness should decrease conformity. Occasionally we feel it's more important to maintain other people's positive regard. This type of influence by normative reasons is called normative influence. Sometimes we conform to gain the approval of the group, in other times we do so to avoid disapproval. In growing up, people often learn that one way to get along with the group is to go along with group standards. ...read more.

The consistent minority, affected subjects in two quite different ways. First, it caused some of the subjects to change their overt responses, a direct effect. Secondly, it affected a larger number of subjects by causing them to alter the way they looked at the blue-green distinction. It caused them to broaden their concept of green, a so-called latent effect of minorities. Nemeth et al (1974) argued that rigid consistency is not necessary to influence. What is important is that the minority seem coherent and certain. She repeated the Moscovici experiment but made one of the confederates alter his judgement after every slide. Minorities have more influence when their position is taken seriously and seen as reflecting certainty and competence. People who are influenced by a minority are thought to experience conversion rather than mere compliance; that is, they don't simply conform in public, but they also experience a change in their private convictions. To conclude, people are influenced by the majority so they can be right and make a good impression on others. Minorities influence with consistency, both over time which is called diachronic consistency and with each other or synchronic consistency. A consistent minority is effective because it is coherent, it disturbs the group norm(s) by creating conflict and it has an innovative impact. Those who can do this have an envied talent. ...read more.