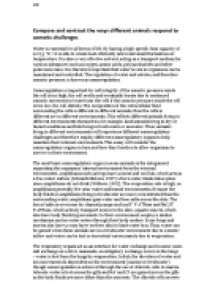 ﻿ictl Compare and contrast the ways different animals respond to osmotic challenges Water is essential for all forms of life. By having a high specific heat capacity of 4.2 J g-1 K-1, it is able to retain heat efficiently and resist small fluctuations of temperature. It is also a very effective solvent, acting as a transport medium for various substances such as oxygen, amino acids, polysaccharides and other polar molecules. It is therefore important that water levels in organisms can be maintained and controlled. The regulation of water and solutes, and therefore osmotic pressure, is known as osmoregulation. Osmoregulation is important for cell integrity: if the osmotic pressure inside the cell is too high, the cell swells and eventually bursts due to continued osmotic movement of water into the cell; if the osmotic pressure inside the cell is too low, the cell shrinks. The composition of the extracellular fluid surrounding the cells is different in different animals, thus the cells in different are in different environments. This reflects different animals living in different environments themselves, for example, land animals living in dry or humid conditions and fish living in fresh water or seawater. Thus, animals living in different environments will experience different osmoregulatory challenges and therefore employ different osmoregulatory organs to help maintain their internal environments. This essay will consider the osmoregulatory organs in turn and how they function to allow organisms to survive in their environment. ...read more.

The osmoregulation mechanisms in the respiratory organs in these animals are very different, reflecting the different environments they live in and thus osmoregulatory challenges they face. Salt glands act as osmoregulatory organs by secreting salts. This is achieved using Na+/ K+ ATPases and Na+/K+/2Cl- transporters to pump NaCl out of the extracellular fluid. The salt glands in marine elasmobranches are located in the r****m, and are therefore known as r****m glands. They secrete NaCl into the lumen of blind-ended tubules, which causes water to flow in as well. The resulting solution is isosmotic with the extracellular fluid but has a much higher NaCl concentration, and is drained into the intestine near the r****m. Elasmobranches use the rectal gland to control the amount of water flowing in due to the NaCl concentration gradient, and thus control the volume of the extracellular fluid. Many marine birds and reptiles also have salt glands, but these are located in shallow depressions in the skull above the eyes (Eckert, 2002). These salt glands consist of secretory tubules that eventually drain into the nostrils, and so are known as nasal salt glands. The secretion mechanism of nasal salt glands is similar to r****m glands, but produces a solution that is hyperosmotic with the extracellular fluid rather than isosmotic. This may be achieved due to a counter-current system of the salt gland and the surrounding capillaries, which allows the concentration gradient of the Na+/ K+ ATPase and Na+/K+/2Cl- transporter has to work against to be as low as possible (Eckert, 2002). ...read more.

Amphibians usually produce very dilute urine to remove excess water as they usually live near freshwater, which flows in osmotically. Thus their kidneys function similarly to freshwater fish. Reptiles that live in freshwater also produce dilute urine. Marine reptiles however can only produce urine that is isosmotic to their blood plasma, and so excrete excess salts via salt glands. The form of nitrogenous waste in the urine of different animals is linked to the amount of water those animals need to conserve. Ammonotelic animals such as fish remove waste nitrogen in the form of ammonia. This is possible as the fish are surrounded by plenty of water. Ureotelic animals such as humans remove waste nitrogen in the form of urea, which requires much less water (50ml of water per gram of nitrogen compared to 500ml of water per gram of nitrogen for ammonotelic animals). Uricotelic animals excrete uric acid, which is very insoluble and appears as a white precipitate. Only requiring 1ml of water per gram of nitrogen, uric acid is the waste product of birds and other animals living in dry habitats, such as terrestrial reptiles (Schmidt-Nielsen, 1997). The osmotic challenges faced by animals are dependent on the conditions of the environment they live in. Different environments pose different osmotic challenges, so the mechanisms animals use to survive in their environments will also vary. By understanding these mechanisms, we can understand how animals have adapted to live in their environments, however harsh they may be. ...read more.