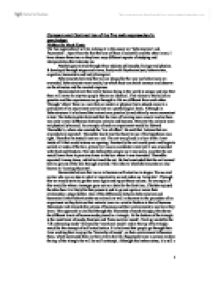 Compare and Contrast two of the five main approaches in psychology.

Compare and Contrast two of the five main approaches in psychology Written By Mark Costa The two approaches I will be looking at in this essay are 'behavourism' and 'humanism'. Apart from the fact that one of them is scientific and the other is not, I have chosen these two as they have very different aspects of studying and interperatation that interests me. Psychology evolved through three subjects philosophy, biology and physics. It developed through stages and views, firstly with Psychoanalysis, behaviarism, cognitive, humanistic and lastly biological. Behaviourists believed that we are shaped by the way our behaviours are rewarded. Behaviourists want results, by which they can check measure and observe on the stimulus and the reacted response. Humanists believe that every human being in the world is unique and also that there will never be any two people whom are identical. This relates to the belief on genetics and the experiences we go through in life are different from each other. Through 'ethics' there is a rule that no mental or physical harm should come to a participant of an experiment carried out on a psychological basis. Although in Behaviourism it is believed that animals are practically and ethically more convenient to test. ...read more.

This process is when a stimulus which brings about no response in a human or animal, until it is associated with another. Pavlov carried out an experiment on a dog to prove this theory. A contraption was made through which he could measure the amount of saliva this dog produced. A bell was rung and there was no significant change in the amount of saliva that was produced. Pavlov slowly began to stimulate the dog with dog food for it to smell, each ringing the bell. Pavlov began to notice that if he rang the bell yet showed no food, the dog would begin to produce siliva in anticipation of it. John Watson realised the potential of this idea, and started the behaviourist movement in 1913, when he wrote an article called, 'Psychology as the behaviourist views it'. This was followed by behaviourists; John Watson, Edward Thorndike and Beirs Frederick Skinner, carried on with Pavlov's theory of 'classical conditioning' forming their own theories on all aspects of human learning. The Humanism movement developed in the America in the early 1960's, where it was believed that it would replace the two other main approaches in psychology at the time; behaviourism and psychoanalysis. ...read more.

Behaviourists have done a lot for psychology in the mainstream by, creating experimental methodologies, which have been very effective to the topic over all. Strengths of humanism are that, it helped people to realise, that it is important to study the human mind and the experiences that people go through. It helped, to stop other approaches becoming too extreme in ideas that were incorrect, and by emphasising that it is important for people to realise who they are, through, self-actualisation'. However ethnologists believe that the use of animals in their experiments only achieved 'artificial learning'. Cognitive psychologists believe that behaviourism, ignores important mental process in learning, hence their results could not achieve accuracy or correct, and humanists disliked their rejection of the experiences humans went through. Whereas, the weak points to humanism are merely based on the way, humanists base their approach. The reasons being they choose to take a less scientific approach, hence they do not have a large impact on the mainstream of psychology. Although these two approaches in psychology have a great effect on the subject, they have weak points but together the five main approaches help us complete an idea of how to perceive people in general. Through comparing both scientific and non-scientific you can use the strengths of both views in order to complete and overall perception of psychology. 1 ...read more.