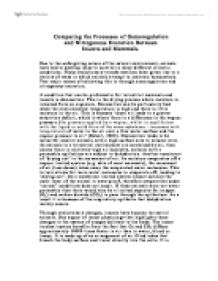 Comparing the Processes of Osmoregulation and Nitrogenous Excretion Between Insects and Mammals. Due to the unforgiving nature of the natural environment

Comparing the Processes of Osmoregulation and Nitrogenous Excretion Between Insects and Mammals. Due to the unforgiving nature of the natural environment, animals have had to develop ways to survive in many different climatic conditions. These evolutionary transformations have given rise to a variety of ways in which animals attempt to maintain homeostasis. Two major means of achieving this is through osmoregulation and nitrogenous excretion. A condition that can be problematic for terrestrial mammals and insects is desiccation. This is the drying process where moisture is removed from an organism. Desiccation can be particularly bad when the environmental temperature is high and there is little moisture in the air. This is because 'dryer air leads to a greater saturation deficit, which is where there is a difference in the vapour pressure (the pressure applied by a vapour, whilst in equilibrium with the liquid or solid form of the same substance - increases with temperature) of water in the air over a free water surface and the vapour pressure in air' (Eckert, 2002). Desiccation tends to be worse for smaller animals with a high surface area to volume ratio. As animals in a terrestrial environment are contained by air, then unless there is relatively high air humidity, animals with a permeable epithelium are subject to dehydration. ...read more.

When blood pressure drops juxtaglomerular apparatus (JGA) cells release renin. This changes angiotensin into angiotensin I, which in turn becomes angiotensin II. Angiotensin II is a vasoconstrictor that helps increase blood pressure and restores glomerular filtration rates. Nitrogen is a major part of amino acids and proteins. As animals tend to receive surplus amounts of amino acids through feeding, the excess is catabolized for either energy release or is used for the production of glycogen and fat. When catabolized, proteins, amino acids or nucleic acids produce ammonia, urea and uric acid. Animals that excrete urea are said to be ureotelic. Terrestrial animals do not use water for the excretion of ammonia, so it is converted into the less toxic, soluble product urea. Animals that excrete nitrogenous waste in the form of uric acid are known to be uricotelic (e.g. terrestrial insects). In these animals ammonia is converted into the less toxic, relatively insoluble, uric acid. This can be excreted with a very small amount of water. In humans, uric acid is not produced from ammonia but is instead made from the adenine and guanine found in nucleotides. Uric acid is normally excreted as a paste. As can be observed there are many differences and similarities between osmoregulation and nitrogenous excretion of insects and mammals. These allow different animals to achieve very specific operations in troublesome climates that ultimately ensure the survival of the species. ...read more.