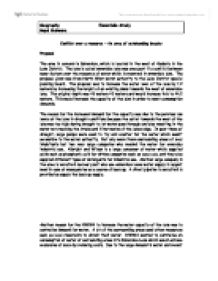 Conflict over a resource - An area of outstanding beauty

Conflict over a resource - An area of outstanding beauty Proposal The area in concern is Ennerdale, which is located in the west of Cumbria in the Lake District. The lake is called ennerdale lake was once part if a conflict between many factors over the resource of water which is reserved in ennerdale lake. The proposal given was from North West water authority to the Lake District special planning board. The proposal was to increase the water level of the lake by 1.2 meters by increasing the height of an existing damn towards the west of ennerdale lake. The original depth was 43 meters 43 meters and would increase this to 44.2 meters. This would increase the capacity of the lake in order to meet consumption demands. The reason for the increased demand for the capacity was due to the pervious low levels of the lake in drought conditions because the outlet towards the west of the lake was too high during drought to let water pass through and also resulting in the water not reaching the intake and filter works of the lakes edge. In past times of drought, large pumps were used to try and counter for the water which wasn't accessible to the water authority. ...read more.

The land which was proposed to be flooded was areas of boulder clay which acts as better soils, some areas has a better pasture out due to the aspect if the sun and provided the farmers with hay in the winter period. This area of land is known as Inbye land and is vital to providing for the movement of sheep and cattle in the winter period. The south eastern side of the lake has land which is very important for the breeding of wildfowl. Also a new access road would have to be built for the farmers to replace the existing one which was unwanted by the NT, the NFU and the RA. The copeland borough council are in charge of the ennerdale valley and surrounding areas and so speculated to whether the proposal should go ahead looking at the needs of local companies and residents and the preservation of the landscape of ennerdale valley. The council waned business to thrive in the area and so had to consider how to maintain their current level of success in the area. The campaign for the preservation of rural England (CPRE) was another factor in opposition. The CPRE exists to promote the beauty, tranquillity and diversity of rural England by encouraging the sustainable use of land and other natural resources in town and country. ...read more.

In recent years the demand has changes somewhat, again this is due to the market of the area. Albright and Wilson who supply acids and various types of detergents, pervious suppliers in Morocco who supplied phosphate rock to be processed now phosphate rock themselves so now the raw material comes as a liquid and so less water is needed to process it which lowers the demand on ennerdale lake and the NWWA. Albright and Wilson then broke up and was sold. The site where the company used was quantities of water was taken over by a company which also had a duplicate company in France and so the Whitehaven plant was closed down. The other half of the plant was run down and so only used two thirds of the original amount. Northern has redirected some of its water to other areas of the country which require water also due to demand. This shows the markets involvements with the rise and fall of demand of water. Now that NWWA has spent so much money on developing a new water intake plant and they are not making as much money back on the water as they are selling less. NWWA are now pumping water to other parts of the country through a new water pipeline. Geography Ennerdale Study Gopal Makwana ...read more.