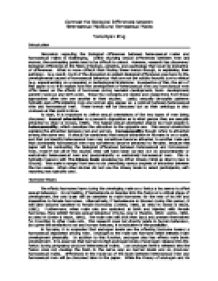 Contrast the Biological Differences between Heterosexual Males and Homosexual Males Tavis Ryan King Introduction Discussion regarding the biological differences between heterosexual males and homosexual males is challenging. Unlike studying sexual differences between men and women, the contrasting points tend to be difficult to detect. However, research has discovered biological differences in the fields of biology, genetics, and psychology that could be indicative of differences. What is more difficult than finding these trends though, is explaining their aetiology. As a result, much of the discussion to explain biological differences goes back to the developmental causes of homosexual behaviour that are not yet solidly founded due to ethical (e.g. experimenting on a neonate) or technological limitations. Irrespective of this, the aim of this paper is to first explain how the development of heterosexual men and homosexual men differ based on the effects of hormones during neonatal development, brain development, genetic make-up and birth order. These four concepts are related and researchers from these approaches often cite one another in their studies. Lastly, sexually dimorphic patterns typically seen differentiating men and women also appear as a contrast between heterosexual men and homosexual men. These trends will be discussed but as their aetiology is also unknown at this point in time. To start, it is important to define sexual orientations of the two types of men being discussed. Sexual orientation is a person's disposition as to what gender they are sexually attracted to (Baur & Crooks, 1999). ...read more.

Dimorphic traits that normal contrast men and women do occur to contrast heterosexual men and homosexual men. As previously mentioned, the size of the anterior hypothalamus could be interpreted as a dimorphic trait. In addition to this, gay men also share the female pattern of decreased cerebral laterality (Reite, Sheeder, Richardson, & Teale, 1995, as cited in Bailey, Chivers, & Mustanski, 2002). Also, EEG patterns of gay men resemble EEG patterns recorded from heterosexual women during spatial and verbal testing (Alexander & Sufka, 1993, as cited in Bailey et al., 2002). Conclusion Biological differences between heterosexual men and homosexual men were largely speculated in the past when scientists were trying to determine a cause of homosexuality when it was considered a mental disorder (Kallman, 1952). Since that time, advances in technology in the fields of microscopy, medicine and genetics, as well as social attitudes surrounding homosexuality as acceptable behaviour and not a disorder have allowed biological characteristics to come to light and be studied by the medical field and social scientists. Biological differences such as hormone levels affecting the neonate, chromosome detection, and birth order seem to be likely factors in determining differences in homosexual and heterosexual men. In addition, new research is finding sexually dimorphic traits normally contrasting heterosexual men and women shared between heterosexual and homosexual men, such as the size of the anterior hypothalamus, brain activities, and performance tasks. Although the origins of this differences are not known and therefore can not imply any conclusions, these findings should inspire new research and studies in the future to detect the reasons these differences exist. ...read more.