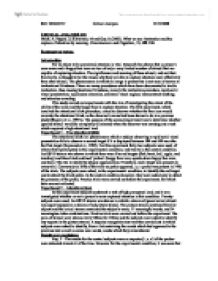 CRITICAL ANALYSIS OF: Mack, A, Pappas, Z, Silverman, M and Gay, R (2002). What we see: Inattention and the capture of attention by meaning. Consciousness and Cognition, 11, 488-506. SUMMARY OF PAPER: Introduction For an object to be perceived, attention is vital. Research has shown that a person's own name and a happy face icon are two of only a very limited number of stimuli that are capable of capturing attention. The significance and meaning of these stimuli, and not their familiarity, is thought to be the reason why they are able to capture attention more effectively than other stimuli. The phenomenon in which an image is present but is not seen is known as inattentional blindness. There are many procedures which have been documented to lead to inattention, thus causing functional blindness, namely the inattention procedure, rapid serial visual presentation, rapid scene alteration, unilateral visual neglect, metacontrast masking, and stimulus crowding. This study carried out experiments with the aim of investigating the extent of the ability of the name and the happy face to capture attention. The first experiment, which involved the attentional blink procedure, aimed to discover whether the face icon would override the attentional blink, as the observer's name had been shown to do in a previous study (Shapiro et al., 1997a). The purpose of the second experiment was to determine whether ignored stimuli would be completely eliminated when the observer was carrying out a task which required a high attentional load. ...read more.

The first of the three most prominent models of attention was put forward by Broadbent in 1958 and is known as the Filter Model. This model says that a filter system carries information to the short-term memory, and if two sets of stimuli are present, only one is able to get through the filter, i.e. unattended stimuli do not get through. This model was proposed as a proponent of the early selection theory, which says that attention is subject to perceptual limitations. Treisman's Attenuation Theory (1964), despite agreeing with Broadbent on the issue of early selection, differs in that it proposes that unattended information is attenuated and if significant enough, has the potential to capture attention, i.e. it is not ignored completely as suggested by Broadbent. The third classic model of attention was by Deutsch and Deutsch (1963), and proposed a model of late selection. It suggested that all information is analysed and selection or filtering occurs at the stage of the response. The conflict between early and late selection models has been addressed by Lavie (1995) who proposed a model in which late selection occurs when the perceptual load is low, and early selection occurs when the perceptual load is high. The results of the study being analysed, which show that meaning captures attention, support this model to some extent. This is because they show that an increase in perceptual load results in only 50% of subjects reporting observation of their name in the unattended stream, as opposed to other studies involving inattentional blindness and attentional blink in which the vast majority of the subjects detect the presence of their name. ...read more.

It also showed that conditioning of the neutral stimuli with the fearful face could adjust detection of the neutral stimuli. A study by Downing et al. (2004) built on this study (Mack et al., 2002) by showing that images of the human body were also capable of capturing attention in an inattentional blindness task. An author of this study (Mack et al., 2002), Arien Mack published a review on inattentional blindness (Mack, 2003), in which he said that although attention, and in particular inattentional blindness has been well established and researched, many questions remain in this field. These uncertainties include whether or not all unattended stimuli are processed, the actual model of attention, whether two separate visual systems exist, and even the implications of inattentional blindness on life and death situations. All of this evidence points to the vastness of this field, and the considerable amount of uncertain information regarding it. In the context of the field, the study by Mack et al. (2002) was worthwhile in that it has confirmed the ability of certain stimuli (the observer's name and the happy face icon) to capture attention, and it has provided more evidence that the key factor in capturing attention is meaningfulness. It has also cast doubts on some aspects of the perceptual load theory (Lavie, 1995). However despite its usefulness, it can by no means be regarded as a 'keystone' study in the field as it was mostly attempting to verify information from previous research, and it provided few definitive answers to some of the important outstanding questions remaining in this field. ...read more.