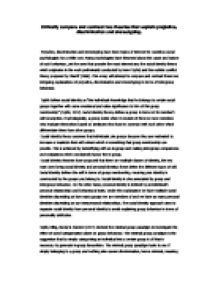 Critically compare and contrast two theories that explain prejudice, discrimination and stereotyping. Prejudice, discrimination and stereotyping have been topics of interest for countless social psychologists for a while now. Many psychologists have theorized about the cause and nature of such behaviour, yet the ones that provoke the most interest are; the social identity theory which originates in the work preliminarily conducted by Henri Tajfel; and the realistic conflict theory proposed by Sheriff (1966). This essay will attempt to compare and contrast these two intriguing explanations of prejudice, discrimination and stereotyping in terms of intergroup behaviour. Tajfel defines social identity as "the individuals knowledge that he belongs to certain social groups together with some emotional and value significance to him of this group membership" (Tajfel, 1972). Social identity theory defines a group in terms of its member's self-conception. Psychologically, a group exists when it consists of three or more members who evaluate themselves based on attributes they have in common with each other which differentiate them from other groups. Social identity theory assumes that individuals join groups because they are motivated to increase or maintain their self esteem which is something that group membership can provide. This is achieved by indentifying with an in-group and making intergroup comparisons and evaluations which conclusively favour the in-group. ...read more.

It is arguable then that there may be more problems with the social identity approach if people have felt the need to elaborate upon it, on the other hand it can be argued that the realistic conflict theory is close to perfect if there has been no advances made to it. The Realistic Conflict theory of intergroup behaviour proposed by Sheriff (1966) explains intergroup conflict in terms of the nature of goal relations between the individuals and groups will determine the nature of intergroup relations. This is different to Tajfel's Social Identity theory which is based upon simply belonging to a group whereas the Realistic Conflict theory is based upon the group's shared goals. Sheriff (1966) argued that if two or more individuals or groups are aiming to reach similar goals then there is a higher tendency for cooperation and a likelihood of a group formation occurring. However, if the individuals are aiming for mutually exclusive goals then this leads to interindividual competition which, in turn, leads to conflict and hostility and the prevention of group formation or even the collapse of an already formed group, principally, attitudes reflect private interest. Sheriff based his Realistic Conflict theory on three famous filed experiments involving young American boys at summer camps. ...read more.

Billig (1976) has criticised the Realistic Conflict Theory for not accounting for any third party involvement, in Sheriff's case, the camp leaders/ experimenters. Billig argued that competitions like the ones in Sheriff's summer camp experiments do not occur naturally and must be organised by a third party, the authority group, which gave rise to the hostility. He also argued that the groups in the summer camp experiments did not occur naturally, but were instead formed artificially which reduces the validity of the experiments. This is also a criticism of Tajfel's Minimal Group Paradigm: the groups do not have a real history and were not formed naturally. In conclusion, it is obvious to see that both the social identity and realistic conflict approach of intergroup behaviour have had a significantly positive impact upon social psychology in terms of explaining prejudice, stereotyping and discrimination. However, neither approach is without its criticisms as with both approaches hold the issue of downplaying the role of context and in turn being reductionist. It is unwise to underestimate external factors when theorizing on social behaviour as there are numerous contributing factors that play a role on people's behaviour. However, the validity of the experiments conducted yields positive results and cannot be doubted in terms of experimental research. Further research should aim to draw multiple accounts and theories together to aim to reach a more holistic approach. ...read more.