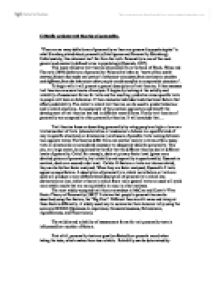 Critically evaluate trait theories of personality. "There are as many definitions of personality as there are personality psychologists" is what Sternberg stated about personality (Intelligence and Personality /Sternberg). Unfortunately, this statement isn't far from the truth. Personality is one of the most general and unclearly defined terms in psychology (Eysenck, 1957). This essay evaluates trait theories of personality on the basis of Block, Weiss and Thorne's (1979) definition of personality: Personality refers to "more of less stable internal factors that make one person's behaviour consistent from one time to another, and different from the behaviour other people would manifest in comparable situations". To begin with it will present a general description of trait theories. It then assesses trait theories on several levels of analysis. It begins by looking at the validity and reliability of assessment forms for traits and the resulting predictive value specific traits in people will have on behaviour. It then evaluates individual and situational factors that affect predictability. The extent to which trait theories can be used to predict behaviour and in which situations. An assessment of the practical application and benefit the development of trait theories has had in different areas follows. Finally trait theories of personality are compared to other personality theories. It will conclude that.... Trait theories focus on describing personality by rating people as high or low on a limited number of traits (characterisitics or tendencies to behave in a specific kind of way in specific situations) or dimensions ( continuum of possible traits running between two opposite traits). The theories differ from one another mainly in terms of how many traits or dimensions are considered necessary to adequately describe personality. ...read more.

A further criticism is that the testing is based entirely on self-reports and is therefore likely to be heavily influenced by the respondent's mood at the time. f) Trait theorists would argue, that a person's behaviour is consistent and predictable in different situations. However, situationists claim that behaviour varies significantly from situation to situation and interactionists argue that behaviour is defined by the continuous interaction between the person and the situation. (p at work) Humanists and Existentialists tend to focus on the understanding part. They believe that much of what we are is way too complex and embedded in history and culture to "predict and control." Besides, they suggest, predicting and controlling people is, to a considerable extent, unethical. Behaviorists and Freudians, on the other hand, prefer to discuss prediction and control. If an idea is useful, if it works, go with it! Understanding, to them, is secondary. A large number of psychologists regard the discovery and validation of the Big Five as one of the major breakthroughs of contemporary personality psychology. This essay examines the successes and failures of trait theories on ... levels. 1) It examines whether the measuring instruments to define traits used in these theories are valid and reliable. 2) Then it will examine the differences and similarities between several trait theories and the relevance on credibility these have. 3) Predictive value of trait theories on real life behaviour. 4) Individual and behavioural differences in quality of predictions of trait theories. Both Eysenck and Cattell made use of questionnaires or rating scales in which the participants were asked to answer carefully phrased questions concerning themselves. ...read more.

They are then asked to tell a story about the people in the picture: Who are they, how did they get there, what are they doing, what is going to happen? Suppose, for example, a picture of two women walking down a country road at sunset toward a small house in the background, is shown. If a subject says that they live in the house, are mother and daughter, they just had dinner, and are enjoying a quiet evening's walk, that is one thing. But, if the story is that the two women's car broke down nearby, they are walking toward the house for help, but will not get it because they will be harmed, then those two stories might prove useful in further questioning of each subject. Finally, the Draw-a-person type of test asks subjects to draw themselves, their family members, or even their houses. Their drawings are then interpreted. One 6-year-old girl I tested drew her parents and siblings as huge, and herself as very small. I interpreted that as a reflection of her perception of her role in the family. Projective tests can be very useful in individual cases, but are usually not used in making comparisons between subjects. (because their strong nervous system inhibits the painful situation better and therefore the subjective experience of pais is less than for introverts). introverst have been observed to experience greater levels of arousal than extraverts and are therefore more saensitive to stimulation (Eysenck, ..., Stelmack, 1990). This affects behaviours in several ways. Theories established empirically by means of factor analysis. Differences in I-E due to different functioning of reticular activation system. Produces (thought by neurophysiologists) nonspecific arousal in cerebral cortex in response to external stimulation. Introverts more aroused than extroverst in standard conditions of stimulation. ...read more.

It would be advisable before writing an essay to make a plan first. This would be helpful to the writer since this particular essay lacks structure and is rather disjointed. The writer could start by defining personality and give a brief introduction to the concept of 'Trait Theory'. Then the writer could go into more detail about the main trait theorists. Although measuring personality is part of the critical evaluation, there needs to be a balance and at the moment there is too little about 'Trait Theory' and too much about the measurement of personality.