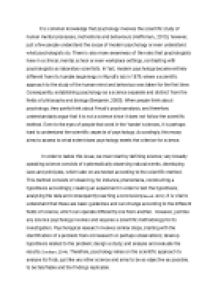 Debate to what extent psychology meets the criterion for a science?

﻿It is common knowledge that psychology involves the scientific study of human mental processes, motivations and behaviours (Heffernan., 2015); however, just a few people understand the scope of modern psychology or even understand what psychologists do. There is also more awareness of the roles that psychologists have in a clinical, mental, school or even workplace settings, contrasting with psychologists as laboratory scientists. In fact, modern psychology became entirely different from its humble beginnings in Wundt's lab in 1879, where a scientific approach to the study of the human mind and behaviour was taken for the first time. Consequently, establishing psychology as a science separate and distinct from the fields of philosophy and biology (Benjamin, 2000). When people think about psychology, they partly think about Freud?s psychoanalysis, and therefore, understandably argue that it is not a science since it does not follow the scientific method. Even to the eyes of people that work in the ?harder? sciences, it is perhaps hard to understand the scientific aspects of psychology. Accordingly, this essay aims to assess to what extent does psychology meets the criterion for science. In order to tackle this issue, we must start by defining science; very broadly speaking science consists of systematically observing natural events, developing laws and principles, which later on are tested according to the scientific method. ...read more.

Moreover, the reason why it is so hard to remain objective is connected to the fact that theoretical standpoints influence us. For instance, when studying a phobia a behaviourist would not consider it in terms of an unconscious conflict as a cause, the same way that Freud would not describe it as a behaviour which is attained via operant conditioning like Watson did with the little Albert experiment (1920), which leads us to what Kuhn (1970) referred to as paradigms (e.g. models, theories). Kuhn claimed that the majority of scientific disciplines only have one dominant paradigm which the bulk of scientists will support, therefore, according to Kuhn anything with more than one paradigm, fails to be considered science and instead becomes a pre-science until can be unified (Orman, 2016). When considering this point of view, with an array of paradigms within psychology, it is not possible to have a unified theory for human behaviour, mostly because the human mind and behaviour is quite complex. It involves an intricate relation between an evolutionary, behaviourist and social perspective, and therefore it is not possible to link a specific behaviour to just one theory. ...read more.

When reflecting on the claims that somethings in psychology cannot be quantified (e.g. anger), or even objective, I must agree that it is true, but the same happens in different scientific fields (e.g.chemistry and drug discovery) when try to define a "druglike" molecule, nonetheless there is no doubt that chemistry is a science. When using the claim that psychology is less rigorous and scientific, is, in fact, more of an accusation, than a quantifiable truth. What matters is that we can acquire definitions that can be at least semi-quantifiable in order to make testable predictions. Therefore, psychological research is useful when it can explain human behaviour and mind and not by what is or not entirely quantifiable. Furthermore, psychology relies heavily on statistics in order to understand if the variability found in some experiments happens by chance or not, the same can be observed in physics, where the Higgs boson could not be directly observed and was only visible through complex tests of statistical significance. And yet there is no doubt in anyone's mind that physics is a science. Psychology should be considered a science because it does rely on the scientific method in order to test and predict something if this did not happen then psychology should still be considered a branch of philosophy. ...read more.