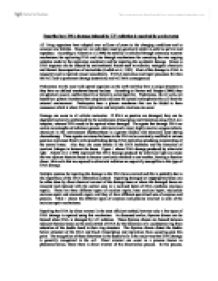 Describe how DNA damage induced by UV radiation is repaired by prokaryotes All living organisms have adapted over millions of years to the changing conditions and to colonise new habitats. However, an individual must be genetically stable in order to survive and reproduce. According to Alberts et al (1998) the stability is achieved through extremely accurate mechanisms for replicating DNA and also through mechanisms for correcting the rare copying mistakes made by the replication machinery and for repairing the accidental damage. Errors in DNA sequence can be induced by environmental factors such as radiation, mutagenic chemicals and thermal decomposition of nucleotides (Lodish et al, 1995). Most of the damage to DNA is temporary and is repaired almost immediately. If DNA replication and repair processes fail then this will lead to permanent damage (mutations) and will have consequences. Prokaryotes are the most wide spread organism on the earth and they have a unique structure as they have no defined membrane-bound nucleus. According to Hames and Hooper (2000) ...read more.

There are three different types of excision repair; base excision repair, nucleotide excision repair and mismatch repair; and they all have different specialised sets of enzymes and proteins. Table 1 shows the different types of enzymes and proteins involved in each of the excision repair mechanisms. Repairing the DNA by direct reversal is the most efficient method, however only a few types of DNA damage is repaired using this mechanism. As discussed earlier, thymine dimers can be formed when DNA is damaged by UV radiation. These thymine dimers are formed between adjacent thymine bases on the same strand of DNA by the formation of a cyclobutane ring from saturation of the double bond in their ring structure. The thymine dimers distort the double helical structure of the DNA and block transcription and replication from occurring past this point. The recognition of these distortions in the double helix is the major way that DNA damage is generally recognized in the cell. Direct reversal can occur as a process known as photoreactivation, where there is direct reversal of the dimerisation process. ...read more.

This mechanism using the enzymes involved in the base excision repair and nucleotide excision repair as well as some enzymes specialized for this mechanism. Recognition of the mismatches and cutting the mismatches requires specific proteins and enzymes. Errors in DNA replication and reactions that damage the nucleotides in DNA cause changes in nucleotide sequence of DNA. If these changes were not efficiently corrected, they would give rise to mutations, many of them would be harmful to an organism. Genetic information can be stored stably in DNA sequences only because a variety of DNA repair enzymes continuously scan the DNA and correct replication mistakes and replace damaged nucleotides. DNA damage caused by chemical reactions and ultraviolet radiation is corrected by a variety of enzymes that recognize damaged DNA and excise a short length of DNA strand that contains it. The missing DNA is resynthesised by a repair DNA polymerase that uses the undamaged strand as a template. DNA ligase reseals the DNA to complete the repair process. Figure 1: Thymine-thymine dimer residue caused by UV radiation. (Lodish et al 1995, p 387) Table 1: The different types of enzymes and proteins involved in the excision repair mechanisms. ...read more.