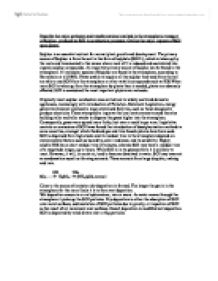 Describe the major pathways and transformations involved in the atmospheric transport of Sulphur, produced as SO2 in combustion processes. Outline the major impacts of SO2 upon plants.

Describe the major pathways and transformations involved in the atmospheric transport of Sulphur, produced as SO2 in combustion processes. Outline the major impacts of SO2 upon plants. Sulphur is an essential nutrient for normal plant growth and development. The primary source of Sulphur is from the soil in the form of sulphate (SO42-), which is taken up by the roots and translocated to the leaves where most of it is reduced and assimilated into organic sulphur compounds. An important primary source of sulphur can be found in the atmosphere. 15 molecular species of Sulphur are found in the atmosphere, according to Berresheim et al (1995). Plants unable to acquire all the sulphur they need from the soil are able to use SO2 from the atmosphere or other volatile compounds such as H2S.When more SO2 is taken up from the atmosphere by plants then is needed, plants are adversely effected. SO2 is considered the most important phytotoxic molecule. Originally most sulphur combustion was carried out in widely scattered domestic appliances, increasingly with introduction of Pollution Abatement Legislation, energy generation became localised in large centralised facilities, such as those designed to produce electricity. ...read more.

The dynamic model stimulates continuous fluxes and SO2 concentrations and related species for several days. A comparison between measured and modelled fluxes at Auchencarth Moss in the Scottish borders from Flechard et al (1999) shows good agreement in both the mean rates of exchange and its temporal variability. This recent work confirms data from previous studies, which suggested the role of NH3 in regulating SO2 deposition (Van Hove, 1989). The concentration ratio of NH3/SO2 exhibits large spatial variability as SO2 is from combustion processes and NH3 largely from livestock emissions. There are however, clear spatial patterns in the average deposition velocity for SO2 in vegetation as a consequence of different relative concentrations of NH3 and SO2 present. Tingely et al (1971) demonstrated using the tabacco plant that there is potential for interaction between SO2 and NO2. The effects of the separate gases are increased greatly when combined. %leaf injury NO2 SO2 0 5 5 0 5 25 26 10 10 60 20 10 0 25 5 68 25 25 100 25 50 Ambient SO2 has declined significantly over the past three decades. E.g., UK, Central England: 1950/1960 50ug m-3 SO2 Present 5ug m-3 SO2 According to Finlayson-pitts and Pitts (1986), typical peak ambient ...read more.

Leading to a decrease in sensitive species and an increase in resistant species. Resistance will evolve when a population contains individuals with heritable differences in characters that effect fitness, e.g. reproduction of offspring. Murdy (1979) showed that animal weed Peppergrass from a SO2 polluted copper basin in Tennessee, USA, showed significantly less flower sterility after exposure of inflorescence to 0.8ppm SO2 for 9hours, than populations outside the basin. The population did not differ in sterility in the absence of SO2. However, resistance has energy costs that may reduce yields, or alter the species niche, therefore it would be an error to assume that breeding or evolution of resistance will always compensate for stress from SO2 and other pollutants. There are a number of natural and anthropogenic sources that release SO2 into the atmosphere. Fuel combustion, metal smelting and oil and natural gas processing produce vast amounts of SO2. Of the 194 tonnes of SO2 emitted annually 83% is duel to fossil fuel combustion. The heat generated by the combustion process carries the SO2 convectively into the atmosphere. SO2 reacts with NO2 and OH in the atmosphere to produce acid rain. SO2 and acid rain have detrimental effects on vegetation such as chlorosis and reduction of photosynthesis. ...read more.