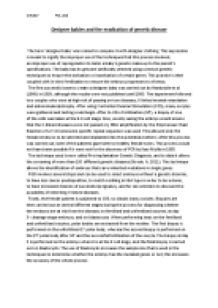 Designer Babies and the eradication of genetic disease

﻿635847 PM-200 Designer babies and the eradication of genetic disease The term ?designer baby? was coined to compare it with designer clothing. This expression is meant to signify the improper use of the techniques that this process involved, an improper use of reprogenetics to tailor a baby?s genetic make-up to the parent?s specifications. The baby has its genome artificially selected using common genetic techniques to ensure the activation or inactivation of certain genes. This practice is then coupled with in vitro fertilisation to ensure the embryo progresses to a foetus. The first successful case to create a designer baby was carried out by Handyside et al. (1990) in 1989, although the results were not published until 1990. The experiment followed two couples who were at high risk of passing on two diseases; X-linked mental retardation and adrenoleukodystrophy. After using Controlled Ovarian Stimulation (COS), many oocytes were gathered and testing could begin. After In-Vitro Fertilisation (IVF), a biopsy of one of the cells was taken at the 6-8 cell stage. Also, as only sexing the embryo would ensure that the X-linked diseases were not passed on; DNA amplification by the Polymerase Chain Reaction of a Y-chromosome specific repeat sequence was used. This allowed only the female embryos to be selected and implanted into the potential mothers. ...read more.

A, 2011). The disorders are all autosomal recessive, autosomal dominant and X-linked diseases and are all due to the mutation of a single gene. The use of PCR to diagnose these diseases had led to some dispute over the accuracy of the results, due to the fact that the DNA must be amplified from a single strand of DNA, which is the smallest possible template that can be used. Because of this, modification of the PCR system must be undertaken to ensure the correct amplification (Rychlik. W, 1990). As this process is easily contaminated, and subject to misdiagnosis, a study was carried out to try to quantify the errors that are made. (Lewis. CM, 2000) The FISH technique uses DNA probes that have a fluorochrome attached and is used to diagnose chromosomal abnormalities, like aneuploidy screening; which is when the cell has an abnormal number of chromosomes. This process has also been used to sex the embryo. This only happens when there is no procedure for PCR for a given X-linked disease. Doubt has been cast over the accuracy of this procedure due to testing of some embryos after they were classed as unfit by the FISH test. Some of these embryos were found to be normal, healthy embryos leading to a decreased chance of pregnancy due to a lower number of viable embryos (Staessen. ...read more.

This caused an ethical storm. PGD is still a controversial topic, with human rights groups campaigning that this could lead to a larger social divide. As PGD, coupled with IVF, is an expensive procedure, it is argued that only the rich will be able to afford to have this procedure. It is also argued that a race of ?genetically enhanced humans? with increased desirable traits (intelligence, height etc.) would look down on those that could not afford PGD, and still suffered from inherited diseases. However, PGD is more ethical than prior techniques used for screening like prenatal screening. This process involved taking a biopsy after the embryo has been implanted and if the embryo was found to contain the defective disease, it would be aborted. Whereas with PGD, no abortion needs to occur. In conclusion, the creation of designer babies is not how the public and the media perceive it to be. PGD is used to select embryos based on a purely medical basis, like the eradication of genetic disease, not to tailor the baby?s specific appearance to the parent?s wishes. In the UK, where the creation of designer babies is tightly regulated by the Human Fertility and Embryology Authority and each case is discussed separately, the ?genetically enhanced humans? remain in the far future. The technique used in the creation of designer babies remains solely embryo selection, and not gene therapy. ...read more.