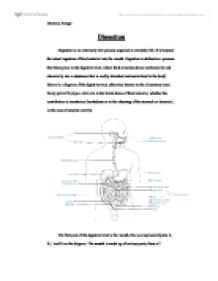 Digestion Digestion is an extremely vital process required in everyday life. It is beyond the actual ingestion of food material into the mouth. Digestion is defined as a process that takes place in the digestive tract, where food is broken down mechanically and chemically into a substance that is readily absorbed and assimilated in the body1. Below is a diagram of the digestive tract, otherwise known as the alimentary canal. Every part of it plays a vital role in the break down of food material, whether the contribution is mechanical breakdown as in the churning of the stomach or chemical, in the case of enzyme activity. The first part of the digestive tract is the mouth; this is comprised of parts A, B, J and D on the diagram. The mouth is made up of various parts, these all contribute towards digestion. The teeth help tear food up, into smaller pieces so the body can deal with it much easier. The salivary glands lubricate food by secreting saliva, which contain amylases, which work chemically to break down starch. The other parts of the mouth support digestion by ensuring the food do not enter the trachea. The most important is the epiglottis, which is a flap of cartilage that covers the trachea when food is entering the oesophagus. ...read more.

The caecum and appendix are responsible for digestion of plant cell wall material. Because humans have a hard time digesting plant material these organs remain quite small and useless in humans. Digestion of a meal such as potato chips and fish coated with batter, fried in peanut oil would begin right at the mouth, because of the chemical composition of the food; that being made of carbohydrates, protein and fats; the foundation of all food material. As the mixture of food enters the mouth this is where food processing begins, this is known as ingestion. Once the fish and chips enter the mouth, it is chewed and mixed with saliva. Chewing breaks the food down into smaller manageable bits; it also increases the surface area for enzymes to work on. Saliva is very essential, the salt component in it makes it alkali in nature. The mucin present in it lubricates the food and helps it stick together3. Saliva contains salivary amylase, an enzyme called ptyalin, which breaks down polysaccharides such as the cooked starch present in the potato chips and batter into maltose and smaller polysaccharides. At this point the food is shaped into pellets called bolus, when swallowing begins the action switches from voluntary to involuntary. The bolus pellets moves down the oesophagus by peristalsis. ...read more.

Maltase works on the maltose from the breakdown of starch to produce glucose. When the starch present in the batter and chips was broken down maltose isn't the only disaccharide produced. Lactase and sucrase work on lactose and sucrose respectively, breaking down to glucose and galactose: glucose and fructose for sucrose. At this stage all of the food material has been broken down into soluble absorbable material. The lining of the ileum is made for this. The folds along the lining and the villi present on the surface are adapted for absorption. The villus structure has a very dense capillary network with a lacteal connecting to the lymphatic system. The glucose and amino acids are absorbed through the epithelial cells, into the capillaries and are transported via the hepatic portal vein to the liver. They may be stored in the liver or altered then released into the blood stream. Some of the fatty acids and glycerol are absorbed in the blood capillaries of the villi; others combine to form fats again and then are absorbed by lacteals 2. The fluids then flow into the lymphatic network and them empty the contents into the blood stream. At this stage most of the nutrients from the chyme have been absorbed. The large intestine (colon) main role is to eliminate waste and absorption of water left over from the ileum. The remains of the meal that could not be digested will pass into the r****m by peristalsis and is expelled through the a**s. ...read more.