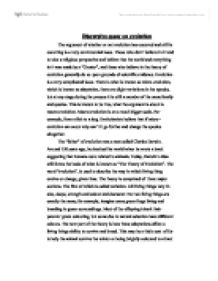 Discursive essay on evolution The argument of whether or not evolution has occurred and still is occurring is a very controversial issue. Those who don't believe in it tend to take a religious perspective and believe that the world and everything in it was made by a "Creator", and those who believe in the theory of evolution generally do so upon grounds of scientific evidence. Evolution is a very complicated issue. There is what is known as micro-evolution, which is known as adaptation, there are slight variations in the species, but at any stage during the process it is still a member of the same family and species. This is known to be true, what the argument is about is macro-evolution. Macro-evolution is on a much bigger scale, For example, from a fish to a dog. Evolutionists believe that if micro-evolution can occur why can't it go further and change the species altogether. The "father" of evolution was a man called Charles Darwin. Around 150 years ago, he shocked the world when he wrote a book suggesting that humans were related to animals. Today, Darwin's idea still forms the basis of what is known as "The Theory of Evolution". The word "evolution", is used to describe the way in which living thing evolve or change, given time. ...read more.

Gradually moths adapted which were better camoflauged on the tree trunks. This is micro -evolution because at every stage during this, the creature was a moth. One of the main points for evolution is convergent evolution. This means that different animals and plants can look very similar. For example, most of the animals in the sea have similar shapes, although it is often doubted that they all started off with that shape. This is said to show that they all adapted in a similar way because they are all in a very similar environment and so they gradually take on the same changes, such as streamlined body shape. As one can see, there is a lot of evidence to support evolution, but there is also a lot of evidence against it. If evolution is a true process, then there should be an abundunce of semi-species remains to support the idea. Scientists say that they have decayed over the millions of years, but they are very good at finding dinosaur remains which are much older, more likely to have been damaged, and practically irrelevant. If one believes strongly in religion, then it is unlikely that they believe in evolution. For example the Christian faith; God is said to have made the earth in six days. It doesn't say that he introduced life to the world, and left it a few million years to evolve. ...read more.

So, what is said to have come from it should be even more complex, but it is not. The horseshoe crab is a simple creature. This is one of the most crucial flaws of evolution, as it has deteriorated over time. In addition, evolution is about creatures becoming adapted to their surroundings. So, if evolution is true, in the far future all creatures will get to the stage that they will be so well adapted to their surroundings, that all the creatures in the same area will be the same. There will be no predators. All creatures in the Congo, will be one type, all creatures in the Antarctic will be the same, and we will have very few species left in the world. Recently top evolutionists had a meeting in Chicago, which concluded with them rejecting gradualism. Gradualism was Darwin's way of explaining how animals and plants changed into one another. This was rejected, and replaced by an instant change, for example a crocodile laying an egg, and a snake or a bird hatching. This is even more unlikely than the first. If it is true, how come in zoos this process has never been witnessed? My personal opinion on evolution, is that it is not true. I believe in God, and that he created everything on the Earth. Nobody knows the exact truth about evolution, but I accept that others have different views and I find them interesting, because it helps me see why I believe in God. ...read more.