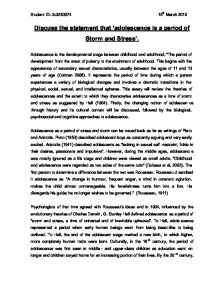 Discuss the statement that adolescence is a period of Storm and Stress.

Discuss the statement that 'adolescence is a period of Storm and Stress'. Adolescence is the developmental stage between childhood and adulthood; "The period of development from the onset of puberty to the attainment of adulthood. This begins with the appearance of secondary s****l characteristics, usually between the ages of 11 and 13 years of age (Colman 2006). It represents the period of time during which a person experiences a variety of biological changes and involves a dramatic transitions in the physical, social, s****l, and intellectual spheres. This essay will review the theories of adolescences and the extent to which they characterise adolescences as a time of storm and stress as suggested by Hall (1904). Firstly, the changing notion of adolescence through history and its cultural context will be discussed, followed by the biological, psychosocial and cognitive approaches to adolescence. Adolescence as a period of stress and storm can be traced back as far as writings of Plato and Aristotle. Plato (1953) described adolescent boys as constantly arguing and very easily excited. Aristotle (1941) described adolescents as "lacking in s****l self-restraint, fickle in their desires, passionate and impulsive". However, during the middle ages, adolescence was mostly ignored as a life stage and children were viewed as small adults. ...read more.

These behaviours can lead to the view that adolescence is a period of storm and stress. Research indicates that Piaget simplifies the developmental process by overestimating the invariance of the order of stages. It has been argued that Piaget exaggerates the universalism of the stages and lacks ecological validity as all his research was based on children from well-educated, high socio-economic backgrounds. Freud's theory of psychosexual development also portrays adolescence as being fraught with internal struggle. According to Freud, during the last stage of psychosexual development, the "genital" phase; the child is inundated with instinctual impulses which disrupt the balance between the ego and id. The ego is pulled between the impulses of the id and the restrictions imposed by the superego. This conflict makes adolescence a time of tremendous stress and turmoil. Unfortunately the work of Freud is heavily criticised; his work is based on a small number of case studies and is therefore regarded as unreliable and cannot be generalised to the whole population. This theory may have been applicable at the time it was developed but is not applicable today. Additionally, Freud's theory has no empirical support as the constructs of the id, ego and superego are subjective and cannot be measured. ...read more.

Unlike the traditional theories of adolescence, the Focal theory has the advantage of being based on empirical evidence. Despite this, coping with one issue at a time does not necessarily indicate stability (Coleman, 1978). There is a need for more evidence, particularly from longitudinal studies, to test Coleman's claim. The claim that adolescence is indeed a time of storm and stress is based on many theories of adolescent development. Each theory puts forward a unique explanation for the basis of turmoil in adolescence, whether it is s****l, cognitive, or resulting from social challenges such as those based on studies of adolescents in treatment, which represents a small population of youth. Conversely, larger-scale studies of development in adolescence that have focused on the 'normal' adolescent population have concluded that turmoil is relatively uncommon (Douvan and Adelson, 1966; Offer and Offer, 1975). Montemayor (1983) concludes that although some conflict in adolescence is likely to be a normal part of the transformations that occur, it also seems clear that there is little support for more extreme storm and stress notions. Adolescents are simply moving forward to be like the group they are going to become: adults. There are a relatively few areas, such as crime , eating disorders and suicide do adolescents undertake behaviour more often than other age groups. However adolescents are still generally believed to be disruptive or out of control. ...read more.