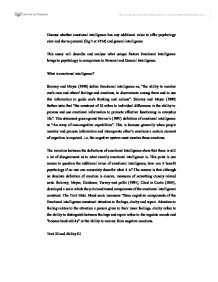 Discuss whether emotional intelligence has any additional value to offer psychology over and above personal (big 5 or FFM) and general intelligence This essay will describe and analyse what unique factors Emotional Intelligence brings to psychology in comparison to Personal and General Intelligence. What is emotional intelligence? Salovey and Mayer (1990) define Emotional intelligence as; "the ability to monitor one's own and others' feelings and emotions, to discriminate among them and to use this information to guide one's thinking and actions". Salovey and Mayer (1990) further state that "the construct of EI refers to individual differences in the ability to process and use emotional information to promote effective functioning in everyday life". This statement goes against Bar-on's (1997) definition of emotional intelligence as "An array of non-cognitive capabilities". This is because generally when people monitor and process information and interoperate other's emotions a certain element of cognition is required. .i.e. the cognitive system must monitor these emotions. ...read more.

Emotional intelligence and personality Robins (1994), States that the five factor model of personality, provides only a "measure of personality structure". Further more it doesn't portray "a model of personality dynamics or personality development." Robins further states that Pervin believes that traits are "purely descriptive" and basically don't account for the "dynamic processes" that he feels are essential in the control and generation of behaviour. The dynamic processes mentioned include moods, emotions, affects and motivation. Therefore emotional intelligence may have psychological significance in identifying how a person's dynamics affect their traits to produce personality. Derksen et al (2002) compared Bar-On's "Emotional Quotient (EQ)" to the General Adult Mental Ability (GAMA) scale. GAMA tests for fluid intelligence. The study found that EQ and GAMA scores did not significantly correlate. Meaning that the EQ tested for something different from the GAMA, I.e. fluid intelligence bears no relation to the intelligence that EQ test for. The study also found that there were "small age related changes in the correlations" between GAMA and EQ. ...read more.