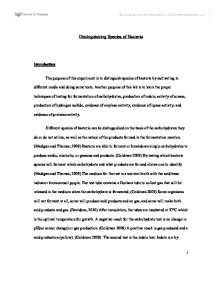 Distinguishing Species of Bacteria Introduction The purpose of this experiment is to distinguish species of bacteria by cultivating in different media and doing some tests. Another purpose of this lab is to learn the proper techniques of testing for fermentation of carbohydrates, production of indole, activity of urease, production of hydrogen sulfide, evidence of amylase activity, evidence of lipase activity, and evidence of protease activity. Different species of bacteria can be distinguished on the basis of the carbohydrates they do or do not utilize, as well as the nature of the products formed in the fermentation reaction. (Madigan and Thomas, 2009) Bacteria are able to ferment or breakdown simple carbohydrates to produce acidic, alcoholic, or gaseous end products. (Goldman 2009) By testing which bacteria species will ferment which carbohydrate and what products are formed allows one to identify. (Madigan and Thomas, 2009) The medium for the test is a nutrient broth with the acid-base indicator bromocresol purple. The test tube contains a Durham tube to collect gas that will be released in the medium when the carbohydrate is fermented. (Goldman 2009) Some organisms will not ferment at all, some will produce acid products and no gas, and some will make both acid products and gas. ...read more.

In table 11, showed that all of the bacteria are capable of producing catalase. Hydrogen peroxide is an superoxide which is able to be degraded by catalase. All of the bacteria where able to produce the enzyme to degrade it. In the oxidase test only Pseudomonas aeruginosa had a positive result. This is because it is the only microorganism out of the others which has oxidase. This means it takes part in cytochrome oxidase activity. Oxidase activates the oxidation of reduced cytochrome c by molecular oxygen in aerobic organisms during electron transport. (Madigan and Thomas, 2009) Oxidized cytochrome c transfers molecular oxygen to tetramethyl-p-phenylenediamine when the reagent is added to growth of an oxidase positive organism. (Madigan and Thomas, 2009) This experiment has the possibility of human error. Mistakes could have been made by failing to sterilize the inoculating loop correctly, which would result in possible contamination of the sample. Another error could have been possibly occurred by mislabeling the plates according to species, which would produce invalid results. In conclusion the experiment was successful. I learned to distinguish species of bacteria by cultivating in different media and doing some tests. I also practised the proper techniques of testing for fermentation of carbohydrates, production of indole, activity of urease, production of hydrogen sulfide, evidence of amylase activity, evidence of lipase activity, and evidence of protease activity. ...read more.