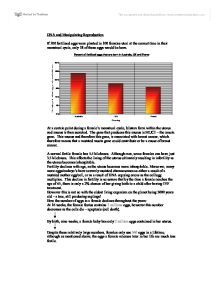 DNA and Manipulating Reproduction If 100 fertilised eggs were planted in 100 females uteri at the correct time in their menstrual cycle, only 18 of these eggs would be born. At a certain point during a female's menstrual cycle, blisters form within the uterus and mucus is then secreted. The gene that produces this mucus is MUC1 - the mucin gene. This mucus and therefore this gene, is associated with breast cancer, which therefore means that a mutated mucin gene could contribute or be a cause of breast cancer. A normal fertile female has 5.5 kilobases. Although rare, some females can have just 3.5 kilobases. This affects the lining of the uterus ultimately resulting in infertility as the uterus becomes inhospitable. Fertility declines with age, as the uterus becomes more inhospitable. Moreover, many more eggs/embryo's have severely mutated chromosomes as either a result of a mutated mother egg/cell, or as a result of DNA copying errors as the cell/egg multiplies. This decline in fertility is so severe that by the time a female reaches the age of 45, there is only a 2% chance of her giving birth to a child after having IVF treatment. ...read more.

Moreover it is also possible to see if the embryo has inherited any genetic disorders or even developed any genetic mutations as a result of DNA copying errors. This can either prepare the parents or have more adverse effects for example termination of the pregnancy. For this reason Ethics must be involved when using this test. Under the umbrella of cell mutation is the repeated copies of some chromosomes, for example three copies of chromosome 18, which is linked to miscarriage. This means that although embryos with mutated chromosomes are born, in lots of cases those embryos that have many mutated chromosomes, the embryo simply dies, there are too many mutations for the embryo to develop into a baby. Thus apoptosis occurs - cell death. The embryo dies and a miscarriage occurs. However if the environment intervenes and allows the abnormal cells to develop and be born, the chromosome mutations can be such that the baby is diseased or disfigured. The female body produces FSH (follicle stimulating hormone) naturally, however research has found that when a pregnant female is injected with a large dose of FSH, the embryo changes, i.e. ...read more.

AIDS, by manipulating this virus we can modify DNA within the nucleus to cure other genetic mutations. Furthermore, there is a genetic disease that exists which despite its adverse effects; it has survived for more than 3000 years because it also protects the sufferer from malaria. Therefore it is safe to say that although some genetic modifications are bad, some of these genetic modifications have been allowed to evolve freely because of their 'greater good'. Professor Lord Winston's ethical justifications for abortion: An embryo is simply a bundle of cells, however a foetus is viable. Given that only 18% of embryos develop and come to full term as a baby, there is a very important distinction between the two, and aborting an embryo should not be considered murdering a baby, as the chances of it even becoming a baby are very low. The time it takes for an embryo to become a foetus is 8 weeks, as explained below and so past this period there should be more consideration as the chances of the foetus coming to full term are higher. 14 days 4 weeks 8 weeks Nervous System Heart Started All Organs Developing Beating Developing Final thought: Genetic modifications should protect, not risk. ...read more.