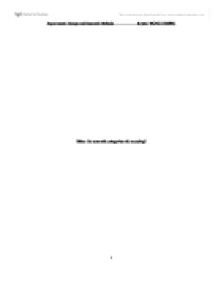 Titles: Do semantic categories aid encoding? Abstract: The aim of this experiment was to examine how encoding affects subsequent memory. Eight males and eight female participants took part in this experiment. Each participant received two lists of word to memorize one was semantic meaning and one was not. It was predicted that words presented in semantic categories are easier to remember compared with words presented not in categories and semantic meaning between words. The prediction was supported. It could be explained that words which are linked together is easier to remember as they are in the same categories, participants could generate them better. Introduction Memory is an ability to store, retain and subsequently receive information. It can be thought of involving three main types according to Atkinson & Shiffrin (1968, 1971), which are sensory memory, short-term memory (STM) and long-term memory (LTM). Sensory memory is our initial, momentary storage of information, which last for only an instant. For example, when you are looking at a picture, sensory memory occurs as the image of the picture enters your eyes and is transmitted to the brain. Short-term memory can hold a piece of information for as long as you actively think about it. Normally people can remember7+/-2 digits on average according to Miller (1956); he presented an idea that in short-term memory people could hold 5-9 (seven plus or minus two) ...read more.

In session two, again, participants were given out a second stimulus sheet, depending on which one they had done in session one. If they had done condition one in session one, then they were given out condition two stimulus sheet in this part, and vice versa. After one minute passed, participants were asked to listen some pure music for one minute like what they had done in session one. Finally they were given an answer sheet to write down as many words as they could remember in one minute. Participants were given out the debrief form and allowed to leave the experiment room. And experimenters recorded the scores for each participant. Psychologists believed that words with high frequency and high concreteness words are easier to be remembered, for example "apple" is the word with high frequency and high concreteness and "abyss" is the word with low frequency and low concreteness. Moreover, previous results indicated the same findings which participants are expected to have better memories with high frequency and high concreteness words more than low frequency and low concreteness words. Results: Comparison on the results of Condition 1 and Condition 2 Figure 1. Means number of words recalled and Standard Deviation in Condition 1 & 2 The means of Condition one is 16.44(+/- 1.41) and the means of Condition two is 9.75(+/- 2.35). ...read more.

In addition, the numbers of participants are not enough to carry out an accuracy result as there are only 16 participants taking part in this experiment. In order to have a better results or a better explanation on how encoding affects human memory, more participants are required and should be selected from the same age groups therefore the aging problems will be solved and the results will be clearer as well. Furthermore, compared with international students and native speaker students, as mentioned above, international students could get a higher mark on both conditions. The reasons of that could be explained by the difference of introducing the experiment. As the international students were told to have an experiment about memory, therefore they might gain the ideas of knowing that they have to remember something during the test. And once those words show to them, international participants will try to remember it first even they are not sure if they have to do that or not. In sum, this experiment shown that participants could remember more than 7 +/-2 words as a short term memory. More importantly, the learning effect and practise effect help to have a better result in the second parts of experiments. Participants learn to rehearse those words while they were shown another word list. Therefore the practice might actually have affected on this findings. However, in conclude that words in semantic meaning is easier to be encoded compared with words in non-semantic meaning and it reached the aim of this experiments. ...read more.