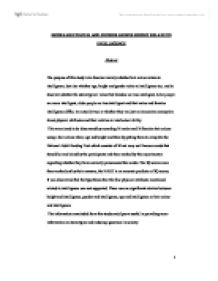 DOES HAIR COLOUR, AGE, GENDER AND/OR HEIGHT RELATE TO INTELLIGENCE

DOES HAIR COLOUR, AGE, GENDER AND/OR HEIGHT RELATE TO INTELLIGENCE Abstract The purpose of this study is to discover mainly whether hair colour relates to intelligence, but also whether age, height and gender relate to intelligence too, and to discover whether the stereotypical views that blondes are less intelligent, taller people are more intelligent, older people are less intelligent and that males and females intelligence differ, are actually true or whether they are just an inaccurate conception about physical attributes and their relation to intellectual ability. This was aimed to be discovered by recording 16 males and 16 females hair colour using a hair colour chart, age and height and then by getting them to complete the National Adult Reading Test which consists of 50 not very well known words that should be read aloud by the participants and then marked by the experimenter regarding whether they have correctly pronounced the words. The IQ scores were then worked out by their answers; the NART is an accurate predictor of IQ scores. It was discovered that the hypothesis that the four physical attributes mentioned related to intelligence was not supported. There was no significant relation between height and intelligence, gender and intelligence, age and intelligence or hair colour and intelligence. The information concluded from this study could prove useful in providing more information on stereotypes and reducing ignorance in society. Introduction A stereotype is defined as 'a conventional, formulaic, and oversimplified conception, opinion, or image' (http://dictionary.reference.com). Stereotyping has plagued our society throughout history. A large number of stereotypes in the world are based on physical appearance. Many studies in psychology relating to stereotypes have aimed at discovering what specific stereotypes exist; only a small amount of research has been carried out to discover whether there is any truth behind these stereotypes. The main focus of this research is to look into the stereotype that blondes are less intelligent. ...read more.

relatively short and they are all deviate from the common rules of pronunciation in order to rely on the participants previous knowledge of the words. The researcher notes down the participants number on their answer sheet (a copy of this sheet can be found in the appendix) and gives the following instructions: 'I want you to read slowly down the list of words starting here', the word CHORD is indicated, 'After each word please wait until I say "next" before reading the next word. I must warn you that there are many words that you probably won't recognise; in fact most people don't know them, so just have a guess at these, O.K.? Go ahead'. The participant then reads aloud down the list of words and the number of errors made is recorded. The correct pronunciations of all the 50 words are found in the appendix of the N.A.R.T. Test Manual and the researcher would have thoroughly familiarised theirselfs with all the words before the test being administered. Allowances for slight variations in pronunciation are deemed acceptable when they are due to regional dialects or speech impediments. If the participant fails to wait for the researcher to say 'next' in between words then the instruction that they should wait is repeated as often as necessary. The participant is encouraged to attempt to pronounce every word on the list and to guess if they don't know them. The participant's responses are reinforced by encouraging them with positive feedback that is reassuring without being strictly dishonest. The participant can change their pronunciation of a word as many times as they like but if they do give more than one version of a word they must decide which version they feel is correct. There is no time limit imposed on this test. If a participant shows anxiety when attempting to answer any of the words then they are reassured that they are not expected to know all the words. ...read more.

There is still a chauvinistic view that women are less capable in the work place, etc, but now as more women are looking to follow careers rather than being housewives, the information would be very useful for recruiters to have so they can be sure that females are not less intelligent than males and therefore just as suitable for a higher position as a similar male. Which would help females who are struggling to follow a career due to stereotypical view of their abilities due to their gender. The information from this study could also be provided to nurses in elderly care homes, a lot of nurses in these kind of homes are thought to be very patronising to the patients and it would help for them to realise that they the patients intelligence has not declined because they are old, but that there cognitive ability has merely slowed down. This would help improve nurse/patient rapport in homes, and make the elderly patients more comfortable as they will be less likely to feel that they are being patronized by their carers. As for the results showing that hair colour and intelligence, this information would benefit the whole population, it would help blonde haired women in many different situation, from anything from making friends to following their career. If people were more accepting and less prejudice about the colour of someone's hair then this would benefit the whole population. The idea that blonde-haired people are less intelligent almost seems to be comparable to r****m, and any kind of prejudice isn't good in society and should be changed. The whole of society would benefit from being less prejudiced towards people and any research that provides confirmation of prejudices is very useful for society as a whole. In conclusion this study, despite its problems has provided many ideas for further research, has provided information that would be useful in society and most importantly has shown that stereotypes are just that. Hair colour, height, age and gender do not relate directly to intelligence. ...read more.