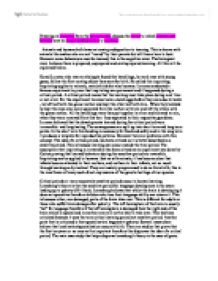 Drawing on examples from the key concepts, discuss the extent to which animals and humans have an innate predisposition to learning.

Drawing on examples from the key concepts, discuss the extent to which animals and humans have an innate predisposition to learning. Animals and humans both have an innate predisposition to learning. This is shown with animals like snakes who are not "reared" by their parents but still know how to hunt. However some behaviours must be learned, this is the cognitive view. The biological view believes there is prepared, unprepared and contraprepared learning. All this will be explained below. Korad Lorenze who was an ethologist found that hatchlings, he work was with young geese; follow the first moving object they see after birth. He called this imprinting. Imprinting applies to animals, mainly birds but also humans. Lorenze conducted a famous experiment to prove that imprinting was permanent and it happened during a critical period. A critical period means that the learning must take place during a set time or not at all. For the experiment Lorenze took a clutch eggs before they were due to hatch , he left half with the goose mother and kept the other half with him. ...read more.

This has been criticized because it uses the term critical learning period not sensitive period. Another point that is criticized is that specialization happens at puberty. Several researchers believe that localization/specialization occurs at birth. There are studies that prove that the first ten years or so may not be important therefore this disproves the idea of a critical period. The main case study that helps disprove lenneburg's theory is the case of genie. Curtiss did a case study on an extremely deprived child called Genie. Genie was born in the USA in 1957 but she was not "found" until 1977. Genie's case helps prove the idea of a sensitive period. She was found at the age of 13 yrs and 7 months however she appeared around 6 years old as she was extremely thin. This was because from the age of 20 months she was confined to extreme small room and also under physical restraint. She received minimal care. She was fed only infant food. She was abused by her father who would beat her for making any noise therefore when she was found she had learned to suppress all vocalizations except a whimper. ...read more.