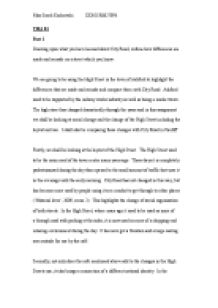 Drawing upon what you have learned about City Road in Cardiff, outline how differences are made and remade on a street which you know

﻿Miss Sarah Kurkowski DD101 B8627894 TMA 01 Part 1 Drawing upon what you have learned about City Road, outline how differences are made and remade on a street which you know. We are going to be using the High Street in the town of Ashford to highlight the differences that are made and remade and compare them with City Road. Ashford used to be supported by the railway works industry as well as being a market town. The high street has changed dramatically through the years and in this assignment we shall be looking at social change and the change of the High Street including the layout and use. I shall also be comparing these changes with City Road in Cardiff. Firstly, we shall be looking at the layout of the High Street. The High Street used to be the main road of the town centre many years ago. ...read more.

In the same way the Mezza Luna run in City Road is run and owned by Nof, a migrant (‘Connected lives’, 2009, scene1 and 5), the owner of the Café Express in High Street is also a migrant but from Turkey. Like Nof the owner has brought his culture and origins into the establishment (‘Connected lives’, 2009, scene 5). The Café Express has been styled as if it would have been if it was in Turkey, they also have a few speciality dishes from Turkey on the menu as well as English dishes. The coffee is imported from Turkey to bring more Turkish identity to the café. At first customers were weary of using the café as the owners were from another country, but over time it has become a very popular café due to its very well mannered and attentive staff, great food and reasonable prices. ...read more.

The customers do sometimes become rowdy and rude as well as sometimes starting fights with one another. The staff in the kebab shop in the High Street deal with confrontational behaviour by alerting the town?s security team to call any police or PCSO?s that are near by. Mostly the social order of High Street is one of compliance and is assisted by the use of CCTV, the security system and presence of police officers as well as signs that are displayed making people aware that these are being used. Looking at High Street, we can see that social identity and social order have played a part in the shaping and change of it. Connections have been made with other parts of the world through migration, and we have also seen a connection between material items and social lives through the use of CCTV and other items in the way that it assists in social ordering. ...read more.