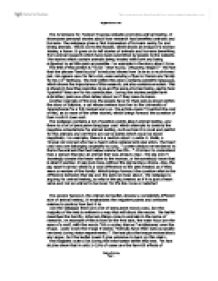 The Americans for Medical Progress website promotes animal testing. It showcases personal stories about how research has benefited animals and humans. The webpage gives a first impression of humans caring for and loving animals. This is due to the header, which shows an image of a woman kissing a horse. It goes on to tell stories of animals and humans benefiting from animal research which have been submitted by people to the website. The stories which contain animals being treated with love and being subjected to as little pain as possible. For example in the story about Duke. The title of this section is "Duke - Best Buddy, Lifesaving Beagle." The fact that the phrase "best buddy" is included shows how Duke is a much-loved pet. His owners care for him a lot, even sending a flyer to friends and family for his 15th birthday. The text within this story contains scientific language, which shows the importance of this research, yet also contains emotion. This is shown in how they describe Duke as if he were a human being, saying how "grateful" they are for his contribution. ...read more.

The second handout, the Animal Aid leaflet, showed a completely different side of animal testing. It emphasises the negative points and criticizes science to portray how bad it is. Like the webpage there are a lot of persuasive words used, but the majority of the text is written in a way that will shock the reader. The leaflet describes the horrific, inhuman things done to animals in the name of research. An example of this is how on the first side, the main focus are the eyes of a wolf, with the words "It's a crying shame." emblazoned over the image. Lower down the image it states "Animals have their eyes surgically removed during vision experiments.". The text plus the image evokes shock and anger, but the leaflet doesn't give evidence to back up this claim. This happens quite a lot during the information within this text. "In fact studies show that in only 5-25% of cases are the harmful effects of medicines correctly predicted by animal experiments.". There is no information to back up this point, such as how the data was found out and 5-25% is quite a varied result. ...read more.

Scientific terminology are used in both texts, yet the leaflet uses it out of context and doesn't elaborate on the uses. It makes the reader believe there is no aim to the experiments, whereas the webpage explains the reasoning behind it. The use of the terminology within the webpage promotes the point of the experiments being used for good and not just aimless suffering of animals, which is a subtle point the leaflet makes. The scientific vocabulary also gives the webpage added credibility. A person is more likely to believe something when it has appropriate evidence behind it. Both texts use images to draw emotion from the reader, yet the webpage shows an image that is happy and positive whereas the leaflet shows images of horror in order to shock the reader. Both texts want to get the reader on their side. They are both trying to persuade the reader to believe in their side of the argument. They want the reader to support them in what they are doing. In my opinion, they are doing that because they don't want people fighting their view, or arguing with what they believe in. English Coursework. Hayley Kennedy Page . ...read more.