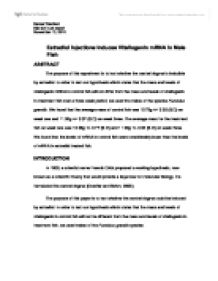 We had 6 fish for each group. Each of the separate groups were sedated for 2 minutes in 0.1g/l of MS-222 and weighed in grams. The weight was recorded. Next, we injected the fish with 0.01 mg/g body weight with either peanut oil (control) or with estradiol (E2) peanut oil (treatment). The injected fish were placed back into their specific tanks and left alone for a two week period. On week 3 the fish were once again sedated in 0.1g/L of MS-222 and weighed. After, we removed the tail at the caudal peduncle and transferred the blood collecting into 1.5 mL capillary tubes. An estimated 2 1/2 tubes of blood were collected per fish. The tubes were blown into 50 mL tubes and centrifuged at 1 RCF for 3 minutes to collect the supernatant (serum) in order to assay for proteins in the future. The fish were beheaded at the point behind the gills and their livers removed. The liver was separated into two pieces and one piece was placed in tube with RNA-STAT-60 (reserves RNA) and the other into a dry tube to be assayed for DNA. The tubes that contained RNA-STAT-60 underwent RT-PCR analysis and the tubes with the dry DNA underwent PCR analysis at temperatures 94�C, 45�C, and 72�C. Finally, the products of PCR and RT-PCR analysis, both underwent gel electrophoresis and the results were recorded. ...read more.

It also allowed us to test whether the central dogma was inducible with estradiol by measuring the mass and levels of vitellogenin in control and treatment-injected male Fundulus grandis over a three week period. During our experimental period, we found that the mass of our fish, male and female, increased. This means that they were in a safe environment and well-taken care of. We found through our PCR results that both control males and treatment males had the gene necessary to code for vitellogenin, meaning that all nuclei had a genomic copy of the vitellogenin sequence in both sexes. Others have found that in most species of fish, especially those that are hermaphroditic, both sexes have the gene necessary for egg-development and egg-yolk development (Thomas Di Giulio and Hinton, 2008). This led us to believe that transcription, the first step in the central dogma, had occurred. Our results from RT-PCR showed that the products of the treatment males matched the female product and that the control males had no products. Studies show that outside simulation, injection or ingestion can cause vitellogenin production in male species (Tyler et.al, 1996). This increase in the levels of cDNA in treatment-injected males led us to believe that RNA synthesis had occurred. In conclusion, the levels of vitellogenin in mRNA in control males was considerably lower than the levels if mRNA in treatment males; the central dogma is inducible by estradiol. ...read more.