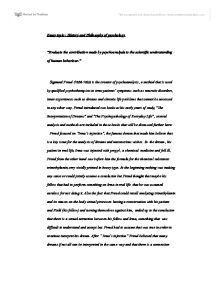 Evaluate the contribution made by psychoanalysis to the scientific understanding of human behaviour.

Essay topic : History and Philosophy of psychology "Evaluate the contribution made by psychoanalysis to the scientific understanding of human behaviour." Sigmund Freud (1856-1939) is the creator of psychoanalysis, a method that is used by qualified psychotherapists to treat patients' symptoms such as neurotic disorders, inner experiences such as dreams and chronic life problems that cannot be accessed in any other way. Freud introduced two books at his early years of study,"The Interpretation of Dreams" and "The Psychopathology of Everyday Life", several analysis and methods are included in those books that will be discussed further here. Freud focused on "Irma's injection", the famous dream that made him believe that is a key issue for the analysis of dreams and unconscious wishes. In the dream , his patient in real life, Irma was injected with propyl , a chemical medicine and fell ill, Freud from the other hand saw before him the formula for the chemical substance trimethylamin,very vividly printed in heavy type. At the beginning nothing was making any sense or could jointly assume a conclusion but Freud thought that maybe his fellow that had to perform something on Irma in real life that he was assumed careless for not doing it. Also the fact that Freud could recall analyzing trimethylamin and its causes on the body s****l processes having a conversation with his patient and Field (his fellow) ...read more.

The patient is hypnotized, told that he is a child at some particular age and asked to describe what he has been doing.This technique, it is hoped , may bring out traumatic details that would be difficult to recover in the waking state. The effective treatment of such approach involves locating the suppressed conflict and bring it to the surface by talking about it so that there is no more conflict suppression. Furthermore Freud attempted to introduce a structural model of personality composed of three elements, the id, the ego and the superego. According to Freud, the key way to a healthy personality is keeping a balance between the id, the ego, and the superego, those three scales can be important to one's personality structure.The id is present in an individual from birth, it is totally unconscious and includes instinctive behaviour is driven by pleasure (needs and wants) and if the needs of the individual are not satisfied anxiety and tension is created. The ego is responsible for dealing with reality and tries to find something in the real world that can be matched with the id's desires. Additionally superego is having the sense of what is right and wrong and what individuals have learned from the society and their parents, eventually is what is driven individuals to make judgments. ...read more.

. Freud's theory was a collection of qulitative data instead of quantitave data ,so he couldn't make any scientific predictions.The justifications for supporting the theory were less than the critiques against it so the reader can conclude that psychoanalysis may not be as great of a theory as previously supposed. Nevertheless , psychoanalysis can be used to explain many aspects of human psychology , the only thing that confirms the theory is the fact that although so many criticisms were made against it the theory is still remaining as a scientific method, containing some valid arguments that can be proved in clinical and research psychology. So in spite of the fact that psychoanalysis and its methods have survived for so long, yet strictly speaking it does not conform to the rigid demands of scientific theory and method. . (word count :1616) Referencing 1) Raymond E. Fancher's Psychoanalytic Psychology: The Development of Freud's Thought (1973). 2) Peter Gay's Freud: A Life for Our Time (1988). 3) Patricia Waugh : Literary Theory and criticism (2006) page 199-211 4) The Columbia Encyclopedia, Sixth Edition 2007 5) Eysenck, H. J. (1986). Failure of treatment--failure of theory. Behavioral and Brain Sciences, 9, 236. 6) Farrel, B. A.(1981): " The Standing of Psychoanalysis". Oxford: Oxford University 7) Holt, R.R.(1986): " Some reflections on testing psychoanalytic hypotheses". Behavioral and Brain Sciences, 9, 242-244. 8) Colby, K.M (1960) : " An Introduction to Psychoanalytic Research", New York. ...read more.