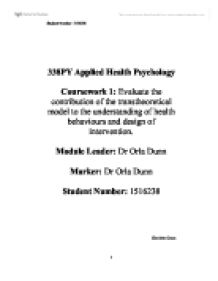 Evaluate the contribution of the transtheoretical model to the understanding of health behaviours and design of intervention.

Coursework 1: Evaluate the contribution of the transtheoretical model to the understanding of health behaviours and design of intervention.

Evaluate the contribution of the transtheoretical model to the understanding of health behaviours and design of interventions.

The transtheoretical model was developed by in the 1983, as a theoretical model of changing behaviours. It has helped develop successful interventions which promote health behaviour change. The model is based around five stages of change, pre-contemplation, contemplation, preparation, action, and maintenance. It also includes ten cognitive and behavioural variables, known as the processes of change.

Many other approaches to health behaviours concentrate on the social aspect of health promotion, for example the theory of planned behaviour, takes into account how socially acceptable things are. Whereas this model focuses much more on the individual, and their intentions and decisions towards changes in their own health behaviours.

This model has been influential in many other areas of health promotion, including smoking, alcoholism, sex and healthy eating. It helps to promote and individualistic approach, where the individual can tailor the model to their own personal health behaviours, and promote change.

A study looking at adolescents’ consumption of carbonated drinks (Buchanan and Coulson, 2007) supports the transtheoretical model. The findings show that many of the teens are either in the pre-contemplation or contemplation stage in regards to changing the consumption of the fizzy drinks, and suggest that using this model would help provide a framework to create tailored health promotion interventions.

Another study carried out in 2006 researching the consumption of fruit and vegetables among adolescents also supported the transtheoretical model (Di Noia, Schinke, Prochaska, Contento, 2006) The results showed that the adolescents in later stages in the cycle were more successful in changing their behaviours than those in the pre contemplation or contemplation stage, those in the later stages also used more processes of change. This would then suggest that using the transtheoretical model interventions can be developed to increase fruit and vegetable consumptions.

The use of the TTM based interventions introduces the idea of a stage-matched intervention. Where the intervention is aimed at the individual depending what stage of the cycle they are currently in. It is therefore able to focus more on the individual needs of each person, and help the change their health behaviours.

Other problems with this model have also been discussed (Weinstein, 1998, West, 2006), for example the model is based on people being able to make conscious decisions, and their ability to make plans. These characteristics cannot be attributed to everyone, therefore the model cannot be applied to everyone. Another negative factor relating to this is that individuals may think they are getting special treatment by using this model, which could then mean they change their behaviours more successfully. This would then mean they are changing because of the attention they are getting and not from the actual model it’s self.

Furthermore the model could be seen to over complicated, it could be possible for some one to go to a doctor, and the doctor just ask simple questions, such as “do you want to give up smoking?”, so a model is never needed.

However, as outlined before, the model does account for relapses, showing it may not be completely successful over time. This may be due to the intense nature of the programmes compared to other approaches to intervention, such as leaflets. With it being more forceful people may find it harder, as they get a short burst of an intense intervention and then are left to maintain the behaviours. This would allow them to relapse, and possibly choose not to use this method again as its too concentrated.

It appears that there are many mixed views into the transtheoretical model proposed by Prochaska and DiClemente, with lots of contradictory research in the field. Although there is a lot of evidence in support of the model, there is also evidence against it, highlighting many problems, which may effect the reliability of the model.

The model contributes highly to the understanding of health behaviours, allowing us to design interventions to change health behaviours. It looks into whether people actually want to change, and if the do how serious they are. The model is realistic as although it is a cycle it also allows for movement forward and backward during the cycle. Being able to design interventions from this model, allows for the individual to play a big role in changing of the behaviour, with the model being tailored to suit their exact needs.

Toward an integrative model of change. Journal of Consulting and Clinical Psychology, 51, 390–395.