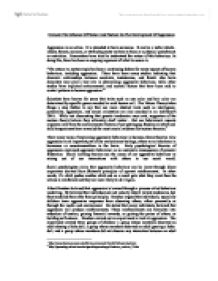 Evaluate The Influence Of Nature And Nurture On The Development Of Aggression Aggression is an action. It is intended to harm someone. It can be a verbal attack--insults, threats, sarcasm, or attributing nasty motives to them or a physical punishment or restriction. Researchers have tried to understand the nature of this behaviour. In doing this, there has been an ongoing argument of what its source is. "The nature vs. nurture topic has been a continuing debate for many aspects of human behaviour, including aggression. There have been many studies indicating that chemical relationships between serotonin, testosterone, and frontal lobe brain chemistry may play a key role in determining aggressive behaviour, while other studies have explored environmental and societal factors that have been said to control patterns in human aggression."1 Scientists have known for years that traits such as eye color and hair color are determined by specific genes encoded in each human cell. The Nature Theory takes things a step further to say that our more abstract traits such as intelligence, personality, aggression, and s****l orientation are also encoded in an individual's DNA. While not discounting that genetic tendencies may exist, supporters of the nurture theory believe they ultimately don't matter - that our behavioural aspects originate only from the environmental factors of our upbringing. ...read more.

It has also been argued that children who behaved violently towards the doll were rated as more violent generally by teachers. Aggression is often described as antisocial behaviour, but by observing adult aggressive behaviour being rewarded children may think this behaviour is acceptable and normative. Therefore it shows that social learning theory explains that is more about learning behaviour rather than being a reflection of an individual's inner state. It also explains the findings which show that children who watch violent films are more likely to behave in an aggressive way. Social learning theory can account for cultural and individual variation; it can also explain why we behave aggressively in some situations and not others. When we are rewarded or reinforced for behaving aggressively, this is related to specific situations, in other situations we may find this behaviour isn't rewarded. This is known as context dependent learning. Biological explanations of aggressive behaviour have stressed factors quite unrelated to social learning. Higher levels of the male hormone testosterone have been cited as a primary causal agent in aggressive behaviour. This casts doubt on aggression being purely a learned behaviour. There are those who believe that aggression is caused by having access to guns, being a victim of abuse at the hands of parents and peers, or by being immersed in a culture that glorifies violence and revenge. ...read more.

Aggression can be "bled off" by violent sport or other situations of controlled violence. The circular theory of aggression is well defined by the saying "violence begets violence" and simply states that aggressive actions provoke more aggressive actions which in turn cause the original perpetrator to aggress further. In conclusion, the fact that modern humans are much more aggressive than their ancestors shows that environment and upbringing definitely effect levels of human aggression. In the modern world, factors such as "influence of media, smoke, noise pollution, air pollution, abusive parenting, overcrowding, heat, and even atmospheric electricity" can lend a hand in aggravating the aggressiveness in humans. Behaviourists generally view aggression as a set of acquired behaviours and attach less emphasis on biological determinants. These scientists commonly apply the "principles of social learning theory" when addressing aggression. People tend to vary their views on nature versus nurture. They are ready to accept that it is genes that cause diseases and cancer, even obesity and homosexuality. Of course, this takes the blame off of human lifestyle. If it is written into their genes, there is nothing they can do about it. However, the public tends to favour the nurture side of the argument when it breaches sensitive topics such as aggression or intelligence. ...read more.