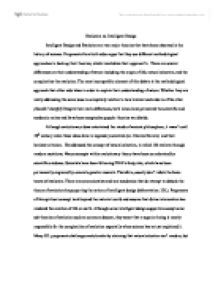 Evolution vs. Intelligent Design Intelligent Design and Evolution are two major theories that have been observed in the history of science. Proponents from both sides argue that they use different methodological approaches to back up their theories, which invalidates their opponent's. There are several differences on their understanding of nature including the origin of life, natural selection, and the complexities the evolution. The most incompatible element of this debate is the methodological approach that either side takes in order to explain their understanding of nature. Whether they are really addressing the same issue is completely relative to how tolerant each side is of the other (should I clarify?) Despite their stark differences, both views have permeated the scientific and academic realms and have been accepted as popular theories worldwide. Although evolutionary ideas entertained the minds of ancient philosophers, it wasn't until 19th century when these ideas drew in legendary scientists (ie- Charles Darwin) ...read more.

Conversely, many evolutionists criticize their challengers for not forming their own theories and conducting original research. These perceptual differences of evolution reflect the methodological approach that scientists from both sides take in order to explain their theories. As mentioned earlier, Darwinian evolution has been established with substantial scientific research. Evolutionists do not feel inclined to investigating beyond the material world. They have been universally accepted into secular schools as theories are reaffirmed through advanced studies of DNA; although evolution endured a controversial battle with the American education system. The Scopes Monkey Trial of 1925 is reminiscent of the evolutionary theory's most famous obstacle before receiving approval from many American school systems. When John Scopes, a high school teacher from Tennessee began teaching evolution based on Darwin's book, On the Origin of Species, he was indicted for illegally teaching it (Lewis). Ever since, evolution has been one of the most sensational topics among students, academics, and scientists. ...read more.

The crux of these debates seems to rely on a very rigid dichotomy between accepting evolution or rejecting it, when in fact, proponents of intelligent design vary in the extent of their support of evolution. There may be some I.D. proponents that believe the whole theory of evolution is heretic and many who at least support at least the very basic tenets of evolution. On the other hand, many evolutionists often overlook the fact that some I.D. proponents do in fact support evolution, even natural selection. It is under the notion, however, that even the randomness of mutation, itself, is designed and controlled by a superior being. Such varied beliefs among I.D. proponents make it very difficult for scientists to have an objective debate. Scientists cannot debate unless they clearly understand who they are arguing with. Relativism is observed when proponents of intelligent design do not accept the notion of natural selection and that the complexities of evolution can solely be explained by an intelligent cause. Otherwise, scientists are not really addressing the same questions. ...read more.

This is a difficult topic to handle objectively, but even so this essay has done a poor attempt of remaining logical and scientific.

The most important point to make in this essay is about methodology. The student has realised this, but then not really made the point very well. It doesn't matter to most scientists to what greater or lesser degree proponents of ID agree with evolution. The bone of contention is that wherever ID is used to patch a perceived 'crack' in evolutionary theory, this cannot be tested. It is not falsifiable. This is a really key point for scientists, because all scientific theories must make falsifiable predictions. There is also a dearth of scientific reading associated with this essay. It looks as though the student has done his best to answer the question based on his own experiences, and then looked up a couple of citations to back it up. There has been no real reading about the debate: no examples of discourse, and no real statistics about the number of scientists believing in Intelligent Design, which I believe the student has mentally inflated somewhat.

Overall, this is a rather disappointing essay, and would score 3/5.