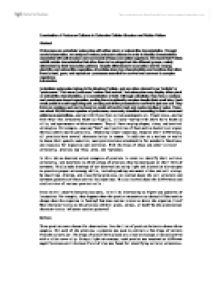 Examination of Protozoan Cultures to Determine Cellular Structure and Motion Pattern Abstract Protozoans are unicellular eukaryotes with either plant- or animal-like characteristics. Through careful observation, we analyzed various protozoan cultures in order to identify characteristics associated with cell structure and movement of these one-celled organisms. We found that Protists exhibit certain characteristics that allow them to be categorized into different groups, mainly determined by their locomotion patterns. Despite differences in locomotion and the varying plant-like and animal-like organelles, all protists share key characteristics and functions that allow them to feed, grow, and reproduce--processes essential for survival and common to complex organisms. Introduction Unicellular eukaryotes belong to the kingdom Protista, and are often referred to as "protists" or "protozoans." The name "protozoan" means "first animal," but eukaryotes may display either plant or animal-like characteristics, or a combination of both. Although unicellular, they have a nucleus and membrane-bound organelles, making them functionally complex despite their small size. Each small protist is a self-supporting unit, carrying out all the processes for survival in just one cell. They thrive on moisture and can be found on moist soil and in fresh and marine bodies of water. There are about 30,000 known species of protozoans, commonly classified according to their movement patterns as sarcodines-moving with false feet called pseudopodia or, flagellates-moving with whip-like structures known as flagella, ciliates-moving with short hairs known as cilia, and sporozoans-with no movement. ...read more.

Protists available for observation: Euglena Paramecium Difflugia Blepharisma Didinium Amoeba Stentor Spirostomum Vorticella Volvox Bursaria Results All protists that were selected had features in common, but they all moved differently. The example protists were: Euglena, Paramecium, and Amoeba. Euglena moved with a flagellum and so is classified as a flagellate (see Fig. 1). Paramecium moved with cilia and so is classified as a ciliate (see Fig. 2). Finally, Amoeba moved with a pseudopod, and so is a sarcodine (see Fig. 3). All three protists had a nucleus, as expected, but the Paramecium had two nuclei, a micronucleus and a macronucleus. The Paramecium and Amoeba both had food and contractile vacuoles, but these were lacking in the Euglena. All protists had animal-like characteristics in terms of their movements and feeding patterns. Of the three, Euglena was the only one that had chloroplasts, an organelle common in plants. Discussion Protists seem to share certain characteristics even when they are classified into different groups. Their organelles are a mixture of animal and plant structures, but they all have nuclei, a feature which distinguishes Protists from other unicellular organisms. The protists' motion was consistent with their locomotion organ: cilia, flagella, or pseudopod. This motion was very clear under the light microscope, but interactions of protists with others in the culture jar were better observed using the dissection scope. ...read more.

As compared to other protists, the animal-like features of the protists we observed allow them to be motile. Their motility comes in handy for moving about their environment and finding food. They may be contrasted to another class of protist, the sporozoans. Sporozoans have no form of locomotion and are primarily parasitic, ingesting their food by absorption through their cell membranes. No matter what type of locomotion a protist uses, all protists must be able to carry out the metabolic functions of multicellular organisms. Based on the observations in this lab, protists are very small yet highly complex. They have all the organelles necessary for a variety of functions such as digestion, excretion, reproduction, respiration, and movement. Protists are self-supporting "one cell factories" churning out all the processes that are usually carried out by a highly-organized network of cells. Conclusion In this lab I learned about the structure and function of the smallest eukaryotic organisms, the unicellular protists. Although very tiny, these organisms are very complex, housing all the necessary life tools in one single cell. This shows that the complexity of an organism is not necessarily related to its size. I also learned to identify and classify different types of protists. I was able to observe locomotion patterns as well as other characteristic features. In doing so, I gained useful microscopy skills such as making wet mount slides, finding the proper magnification for viewing, and drawing microscope observations with all the proper labels. ...read more.