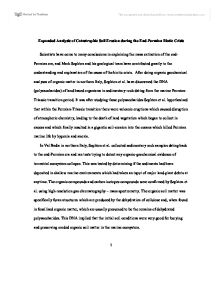 Expanded Analysis of Catastrophic Soil Erosion during the End-Permian Biotic Crisis Scientists have come to many conclusions in explaining the mass extinction of the end-Permian era, and Mark Sephton and his geological team have contributed greatly to the understanding and explanation of the cause of the biotic crisis. After doing organic geochemical analyses of organic matter in northern Italy, Sephton et al. have discovered the DNA (polysaccharides) of land based organisms in sedimentary rock dating from the marine Permian-Triassic transition period. It was after studying these polysaccharides Sephton et al. hypothesized that within the Permian-Triassic transition there were volcanic eruptions which caused disruption of atmospheric chemistry, leading to the death of land vegetation which began to collect in excess and which finally resulted in a gigantic soil-erosion into the oceans which killed Permian marine life by hypoxia and anoxia. In Val Badia in northern Italy, Sephton et al. collected sedimentary rock samples dating back to the end-Permian era and ran tests trying to detect any organic-geochemical evidence of terrestrial ecosystem collapse. This was tested by determining if the sediments had been deposited in shallow marine environments which had taken an input of major land-plant debris at anytime. The organic compounds and carbon isotopes compounds were confirmed by Sephton et al. ...read more.

This is most likely the cause of the widespread end-Permian soil erosion according to a fellow field scientists Visscher et al., (1996) and Maruoka et al., (2003). The soil stability and soil samples showing reduced bacteria content and decreased polysaccharide decomposition rates was most likely the result of the acidification. The volcanic emissions are the most probable reason for the elevated atmospheric carbon dioxide concentrations. This in turn presented very serious implications for the marine ecosystem. With an excess of nutrients from the soil erosions pouring into the marine biota, widespread eutrophication began to occur and in stratified waters, the decaying of sunken dead phytoplankton lead to hypoxia, where dissolved oxygen in bottom waters was below the necessary level to sustain most animal life, and which ultimately led to anoxia. Then, in shallow marine waters, excessive riverine clay and silt deposits caused increased turbidity. With increased turbidity there was a reduction in an available energy source for marine organisms to use. Limited light penetration meant impaired photosynthesis which stunted plant growth and depleted dissolved oxygen which contaminated marine habitats for organisms which relied on an oxygen supply in the water. With inhibited reef buildup and asphyxiated organisms, the marine food web collapsed, leading to mass extinction. ...read more.

Science is broken up into many different disciplines that can be studied in life, so scientists are really nothing more than people who possess expert knowledge in a particular discipline. However, when scientists use the scientific method in their efforts to extend and deepen our understanding of the physical world, the everyday person usually finds him or herself lost in translation. If the discoveries of the study cannot be shared with the greater public, they really serve no purpose. As well, the scientific method becomes inherently meaningless. If the principles and empirical processes of discovery and demonstration of scientific investigation are exclusive, there is no opportunity for replication and further validation of the hypotheses. As well, if no one can understand the discoveries of the studies, the general public will find no relevance in them or be able to establish a connection with, understanding of, and appreciation for the scientific process. Without publicity, science is just an extensive secret serving no function to society. It's also a two way street. Many times the scientific process is funded and executed through the means of answering pressing questions of society, and if not everyone in society can understand it, many will see it fit to take up the bill. The mainstream media acts as the essential middle man in bridging the great gap between the scientific community and the predominately undereducated general public. ...read more.