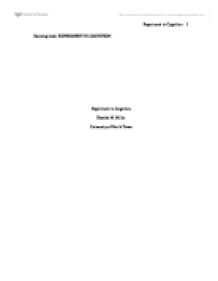 Running head: EXPERIMENT IN COGNITION Experiment in Cognition Eleasha M. Miller University of North Texas Abstract This experiment was conducted to further the previous research of Smith, Ward, and Schumacher (1993) and Marsh, Landau, and Hicks (1996) on the standard conformity effect. Participants in the experimental group were shown examples of three creatures that shared features converging on the single concept of hostility, while participants were not shown ay examples. Consistent with previous research, the experimental group participants' novel creations conformed to the examples they were shown even with specific instructions to not copy any aspect of the examples. Additionally, participants in the experimental group used more hostile features when creating novel creatures than the participants in the control group who were not shown examples. These results suggest that outside influences can unintentionally have profound effects on creativity and originality. Experiment in Cognition One facet of creativity research explores how memory contributes to the products of creativity (e.g. ...read more.

If the participants in Smith et al.'s experimental group "designed creatures that possessed a greater number of features than the critical ones as compared with controls, the examples could have arguably facilitated more elaborate designs and hence enhanced creativity" (Marsh et al., 1996). In order to test this, experiments were set up similar to Smith et al. but additionally; creativity was examined more closely using the proportion of copied features to novel features. The standard conformity effect was observed, however, evaluating the different metrics of creativity (total output, elaborateness and number of non critical features) yielded results that showed providing examples did not constrain creativity. Although the conformity effect has been replicated over many studies, it is not clear whether the effect is due to perceptual effects or whether the examples help generate a particular category representation. The goal of this experiment was to ascertain whether three shared features that converged on the single concept of hostility would cause concept-related features to be incorporated into participants; novel designs. ...read more.

F = 9.719, p = .003. The results should therefore be interpreted with caution. An independent samples t-test revealed that the experimental group which was shown creature examples (M = .1285, SD = .1443) used significantly more hostile features compared to the control group which was not shown creature examples (M = .0369, SD = .1043), t(39.984) = -2.592, p = .013. Discussion The results of the experiment supported the hypothesis that the standard conformity effect would be found and that participants would incorporate additional features that are consistent with the hostility concept, but that were not shown on the examples, into their designs. These results support Smith et al. and Marsh et al.'s claims that providing examples does indeed affect creative output. One explanation for the results is that the natural need for humans to learn and categorize inhibits creativity. Another explanation would be a more social need to conform. Future experiments could test not only creative ability but also correlate those results with conformity tests to determine whether the conformity effect might have more to do with personality than creativity. ...read more.