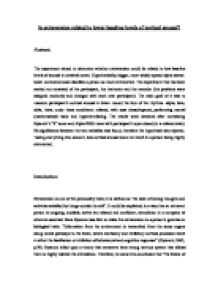 Is extraversion related to lower baseline levels of cortical arousal? Abstract: The experiment aimed to determine whether extraversion could be related to low baseline levels of arousal in cerebral cortex. Hypothetically, bigger, more widely spread alpha waves- lower cortical arousal classifies a person as more extroverted. The experiment that has been carried out consisted of the participant, the instructor and the recorder (the positions were assigned randomly and changed with each new participant). The main goal of it was to measure participant's cortical arousal in brain- record the four of the rhythms- alpha, beta, delta, theta, under these conditions: relaxed, with eyes closed/opened, performing mental (mathematical) tasks and hyperventilating. The results were obtained after correlating Eysenck's "E" score and Alpha RMS mean with participant's eyes closed (in a relaxed state). No significance between the two variables was found, therefore the hypothesis was rejected. Taking everything into account, low cortical arousal does not result in a person being highly extroverted. Introduction: Extraversion is one of the personality traits; it is defined as 'the state of having thoughts and activities satisfied by things outside the self'. It could be explained in a way that an extravert person is outgoing, sociable, active but relaxed and confident, stimulation in a company of others is essential. Hans Eysenck was first to relate the extraversion to a person's genetics or biological traits. ...read more.

Three classes carried out the experiment, the process of carrying it out included dividing each class in a several groups of four or five. Each member of the group allocated their position as a 'subject', 'director' or recorder and swapped their places with each new participant. In addition, each group did two to three participants. The allocation of the roles was completely randomised. The results might slightly been influences by a few factors: the variation of the participants' age, nineteen to twenty five years, gender distribution, a total number of female participants in a class were thirty four, male-twelve. A few of the participants were non-native English speakers. The equipment, needed to carry out the experiment, included the 'Biopac' system- electrode lead set- to record cerebral cortex's arousal and a computer system- to represent and track the data- brains activity- raw EEG (electroencephalogram) signal and four of the brain rhythms: alpha, beta, delta, and theta. The software, used for the experiment was the 'Biopac' analysis software. In addition, Eysenck's Personality Inventory was used to estimate the extraversion score. Firstly, after assigning the positions for each member of the group, the participant was placed in a seat; three vinyl electrodes were attached to participants' scalp. The results were collected, having the participant to perform tasks under these conditions: relaxed with eyes closed, performing mental arithmetic tasks with eyes closed, hyperventilating with eyes closed and finally, relaxed with eyes opened. ...read more.

However, the experiment cannot be said to have external validity due to resulting in having no significance of correlation coefficient between the variables that were measured. A similar to this experiment was carried out in 2004 by Tran et al. It mostly focused on the association between brain activity and personality among mentally healthy adults. The participants completed NEO-FFI personality test and took EEG session. Similarly as to our experiment, these two variables were correlated in order to find out whether there was a relation between brain activity and personality traits. However, it resulted in having a mild association between the NEO-FFI personality traits and resting regional brain activity. Taking everything into account, on the basis of these two experiments, low baseline levels of arousal in cerebral cortex in brain cannot be related to extraversion as a personality trait. Conclusions: To summarise the experiment that has been carried out and its outcome, it can be said that the hypothesis which stated the possible relation between extraversion as a personality trait and lower baseline levels of cortical arousal, was rejected. There was no significance between the correlation of "E" score and alpha RMS mean having the participant's eyes closed. Thus, Han Eysenck's trait theory was failed to prove. However, the experiment has had a few aspects that might be improved in similar future research. There were a significantly higher number of female participants than male. As previous Tran et al study suggested, different amounts of delta and theta activity during resting condition may result in different extraversion level in males and females. ...read more.