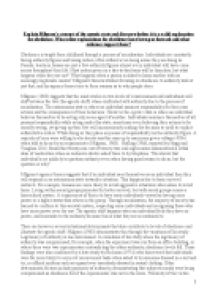 Explain Milgram's concept of the agentic state and discuss whether it is a valid explanation for obedience. What other explanations for obedience have been put forward and what evidence support these?

﻿Explain Milgram's concept of the agentic state and discuss whether it is a valid explanation for obedience. What other explanations for obedience have been put forward and what evidence support these? Obedience is taught from childhood through a process of socialisation. Individuals are constantly facing authority figures and taking orders, often without even being aware they are doing so. Parents, teachers, bosses are just a few authority figures almost every individual will have come across throughout their life. Most orders given on a day-to-day basis will be harmless, but what happens when they are not? What happens when a person is asked to harm another with no seemingly legitimate reason? Milgram's famous studies focusing on obedience to authority look at just that, and his agency theory tries to form reasons as to why people obey. Milgram (1963) suggests that the mind works on two levels of consciousness and individuals will shift between the two (the agentic shift) when confronted with authority due to the process of socialisation. The autonomous state is where an individual assumes responsibility for their own actions and the consequences of their behaviour. ...read more.

Although the agency theory provides some valid concepts especially when explaining the importance of the relationship between a feeling of personal responsibility and levels of obedience displayed by subjects, it is often criticised as not providing enough of an explanation. It is viewed more of a description of the social system and how it works rather than and explanation of obedience. Social power is one alternative explanation of obedience. French and Raven (1959) identified five different types of social power; reward, coercive, referent, legitimate and expert. Figures deemed to hold authority within any society hold at least one of these forms of social power. Dependant on which form of power they hold, individuals are likely to obey for different reasons. Reward power results in positive reinforcement, Milgram's participants may have felt compelled to obey him because they were being paid to do so. Coercive power is the opposite, fear of negative reinforcement. Due to the fact the Milgram was asking for electric shocks to be administered, participants may have felt an element of fear for him. Milgram may have also been seen to hold both legitimate and expert power, as he was seen as an expert in his scientific field and would have been dressed in such a way that illustrated this reinforcing his legitimacy. ...read more.

Participants would have deemed Milgram as holding, expert, legitimate, coercive and reward power therefore making him appear a very powerful authority figure indeed. The ?learner? was also out of sight, therefore providing the argument for the social identification theory. Participants would have seen the ?learner? as the outside group, identifying with the experimenter. When social identity was broken between the two, participants were far less likely to obey orders. Although there isn't much empirical evidence for personality affecting obedience in Milgram's study. It has been found to be a deterministic feature for decision making and resisting social pressures in other studies (Blass, 1991), therefore making it impossible to rule it out as a factor affecting obedience. As Milgram's agency theory is seen more as a definition rather than an explanation of obedience it would be more plausible to use other theories such as the social identification theory to draw conclusions as to why people obey. Milgram has however provided valuable insight into understanding of obedience and much more recent research would not have been possible without his original findings. His studies into obedience to authority still remain the most recognised and talked about obedience studies world wide. Word Count: 1483. ...read more.