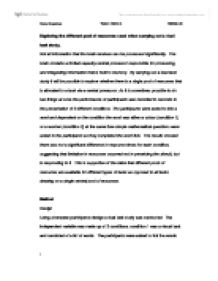 Exploring the different pool of resources

Exploring the different pool of resources used when carrying out a dual task study. Not all information that the brain receives can be processed significantly. The brain contains a limited capacity central processor responsible for processing, and integrating information that is held in memory. By carrying out a dual task study it will be possible to explore whether there is a single pool of resources that is allocated to a task via a central processor. As it is sometimes possible to do two things at once the performance of participants was recorded in seconds to the presentation of 2 different conditions. The participants were asked to tick a word and dependent on the condition the word was either a colour (condition 1) or a number (condition 2) at the same time simple mathematical questions were asked to the participants as they completed the word lists. The results showed there was not a significant difference in response times for each condition, suggesting that limitation in resources occurred not in perceiving the stimuli, but in responding to it. This is supportive of the claim that different pools of resources are available for different types of tasks as opposed to all tasks drawing on a single central pool of resources. ...read more.

They were asked to place a tick next to all of the words that were the either; as in condition 1 the name of a colour, or as in condition 2; the words that were a number. Participants were instructed to begin with the word on the top left hand side of the column, working downwards until moving to the right hand column. It was explained for both conditions that as they were doing this, simple mathematical questions would be asked and that each question should be answered as it is asked. Participants were then asked if they understood the task, once this was confirmed the sheet of A4 containing the word lists for one of the conditions were placed in front of the participant. Once the sheet was turned over the stopwatch began timing and once the task was completed the response times were recorded on a separate response sheet. For the next participant a different condition was used, and each condition was then alternated per participant. It was then explained to the participant the aim of the experiment and open discussion and questions were invited and answered. ...read more.

Kahnemans theory (Kahneman 1973) claims that if a person tries to do several things at once and there is a common pool of resources then there should be some interference. Both this experiment and McLeod's study have demonstrated that two tasks can be carried out at once without interference, implying that 'either one or more of the tasks is not drawing on the central processor at or, or that each task is accessing a separate pool of resources'. (The Open University, 2004). This is known as Multiple-resource theories of attention. What also needs to be considered are the participants used in the experiment. The age of participants was quite wide ranging (33 to 64). As people get older, reaction times slow down and thus this could have had an effect on the results. Furthermore, a slight modification to this experiment could have made the differences of the 2 conditions more clear. For example the word list in the number task list could have been modified to have all words as being a number with the participant being asked to only tick one number., i.e., please tick all words that read TWO. This would have clearly separated the two conditions and provided a clear link with the auditory task. ...read more.