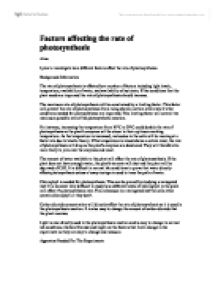 Factors affecting the rate of photosynthesis

The lights are also a source of heat which will affect the experiments with only a small distance between the light and the syringe. this heating could affect the results. Using the same piece of elodea for each experiment was impractical as the elodea's photosynthesis rate decreased over time. By using a different piece of elodea for each experiment did create the problem of it being impossible for each piece to have the same surface area. As the tests took place over a two day period there will be some inaccuracy caused by factors such as temperature. There was no practical way for the long tests to be kept at a totally constant temperature for the two day period and they will probably have cooled down at night and then warmed up in the day leading to a slight inaccuracy. Extension Work This experiment could be improved in a number of ways. It could be repeated more times to help get rid of any anomalies. A better overall result would be obtained by repeating the experiment more times because any errors in one experiment should be compensated for by the other experiments. Each person should have done their experiments in a different room to cut out all background light. All the experiments should be done sequentially. A perspex screen could have been placed between the light and the syringe to reduce any heating effect that the light may have. The experiment could have been carried out with higher NaHCO3 to see if increasing the concentration would increase the rate of photosynthesis, or if a concentration of 0.1M NaHCO3 produces the maximum rate of photosynthetic reaction. ...read more.