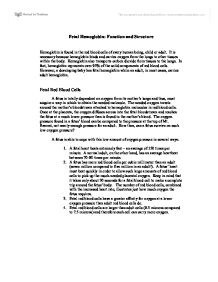 Fetal Hemoglobin: Function and Structure Hemoglobin is found in the red blood cells of every human being, child or adult. It is necessary because hemoglobin binds and carries oxygen from the lungs to other tissues within the body. Hemoglobin also transports carbon dioxide from tissues to the lungs. In fact, hemoglobin represents over 95% of the solid components of red blood cells. However, a developing baby has fetal hemoglobin while an adult, in most cases, carries adult hemoglobin. Fetal Red Blood Cells A fetus is totally dependent on oxygen from its mother's lungs and thus, must acquire a way in which to obtain the needed molecule. The needed oxygen travels around the mother's bloodstream attached to hemoglobin molecules in red blood cells. Once at the placenta, the oxygen diffuses across into the fetal bloodstream and reaches the fetus at a much lower pressure than is found in the mother's blood. The oxygen pressure found in a fetus' blood can be compared to the pressure at the top of Mt. Everest, not nearly enough pressure for an adult. How then, can a fetus survive on such low oxygen pressure? ...read more.

This location is used from about 2-5 or 6 months. Finally, the cells are made in the bone marrow of the fetus for the duration of the pregnancy and throughout the fetus' adult life. Fetal Hemoglobin During the entire nine months of fetal formation, three different hemoglobins are produced, with one switching off as the next one begins. All three types contain the same heme molecules with an iron atom in the center, but they all have different globins - the structure will be discussed in more detail later. For the first eight weeks of prenatal life, the majority of hemoglobin is of the type called embryonic hemoglobin (Hemoglobin E). Production of Hemoglobin E soon ends and fetal hemoglobin, the most important, is created next. Fetal Hemoglobin (Hemoglobin F) is the predominant form of hemoglobin expressed in a developing fetus. Hemoglobin F appears a few weeks post-conception and exists for a few months post-birth. It is not clear whether, although fetal red blood cells have a greater affinity for oxygen than an adult's, if the same holds true for Hemoglobin F. ...read more.

Hemoglobin F is made up of 2 alpha chains and 2 delta (fetal) chains. These delta chains are polypeptide chains, referred to as gamma subunits, that are homologous to the beta chains of Hemoglobin A. Adult hemoglobin is made up of 2 alpha chains and 2 beta (adult) chains. The primary structural differences in Hemoglobin F as compared to Hemoglobin A are found in or near the 2,3 BPG binding site. 2,3 BPG binds less tightly to deoxy (desaturated) Hemoglobin F as compared to deoxy Hemoglobin A. An additional difference to note is of the P50 values (% O2 at which hemoglobin is 50% saturated). For Hemoglobin A, the value is 26.7 mmHg, while for Hemoglobin F, the P50 is 19 mmHg. Breakdown Each hemoglobin molecule has a life span equal to about that of the red blood cell in which it is contained, roughly 120 days. When old red blood cells are destroyed, the heme is metabolized into iron which is reused, and to porphyrin, which is degraded to bile pigments and discharged by the liver. The four polypeptide chains of the hemoglobin protein are broken down into amino acids which may be used again in other metabolic processes including the formation of new protein. ...read more.