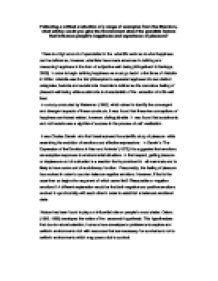 Following a critical evaluation of a range of examples from the literature, what advice could you give the Government about the possible factors that influence peoples happiness and experience of pleasure?

Following a critical evaluation of a range of examples from the literature, what advice could you give the Government about the possible factors that influence people's happiness and experience of pleasure? There is a high amount of speculation in the scientific world as to what happiness can be defined as, however, scientists have made advances in defining and measuring happiness in the form of subjective well-being (Kringelbach & Berridge, 2009). In order to begin defining happiness we must go back to the times of Aristotle in 300bc. Aristotle was the first philosopher to separate happiness into two distinct categories; hedonia and eudaimonia. Hedonia is defined as the conscious feeling of pleasant well-being while eudaimonia is characteristic of the sensation of a life well lived. In a study conducted by Waterman (1993) which aimed to identify the convergent and divergent aspects of these constructs, it was found that these two conceptions of happiness are indeed related, however, distinguishable. It was found that eudaimonia and not hedonia was a signifier of success in the process of self-realization. It was Charles Darwin who first foreshadowed the scientific study of pleasure while examining the evolution of emotions and affective expressions. In Darwin's 'The Expression of the Emotions in Man and Animals' (1872) it is suggested that emotions are adaptive responses to environmental situations. In that respect, getting pleasure or displeasure out of a situation is a reaction that is prominent in all mammals and is likely to have some sort of evolutionary function. Presumably, the feeling of pleasure has evolved in order to counter-balance negative emotions. However, if that is the case then so begins the argument of which came first? Pleasurable or negative emotions? A different explanation would be that both negative and positive emotions evolved in synchronicity with each other in order to establish a balanced emotional state. Nature has been found to play an influential role on people's mood states. ...read more.

Any excess glucose is stored as glycogen in the liver or muscles, or as triglycerides in adipose tissue which can be released again with the help of glucagon. Triglycerides can be broken down by fatty acids and glycerol. Glucose can only be absorbed by cells when insulin is secreted; however, the rate at which insulin is secreted is different for different nutrients (simple carbohydrates produce a quicker secretion rate than proteins). Satiation (the end of the consumption stage) mechanisms involve the gastric fill (the feeling of repletion in the stomach) and nutrient specific receptors in the stomach and liver and fat receptors in the duodenum. Satiation normally becomes apparent when positive feedback from food in the mouth and negative feedback from receptor activation and the gastric fill is equal. However, satiation also depends on the energy density of foods. Satiation mechanisms for proteins are quick and relatively strong, whereas satiation mechanisms for fats are slow and weak. Blundell (1991) stated that if a meal is high in fat content then the satiation mechanisms are weak and slow which leads to "passive overeating". Food preferences vary culturally and individually. Cultures have a large influence on what is considered to be pleasurable food or not, this can be a cause of availability, genetics or religion. However, because of the quantity and variation of taste receptors in each individual human are different then the experienced taste is also different depending on what taste receptors one possesses. According to Miller and Reedy (1990), the greater number of taste receptors, the more intense the reported taste experience. The consequences of excessive food consumption may cause weight gain which in turn could lead one to exercise in order to counterbalance these effects. Kaplan et al (1982) interviewed people who exercise regularly and found that they did so for a number of reasons. The first and most obvious reason was to maintain a healthy body, however, other responses included that it helped reduce anxiety and stress levels. ...read more.

Pleasurable emotions are generally an understudied topic compared to the study of negative emotions mainly because pleasure is so difficult to define. Pleasurable emotions involve multi-sensory processing, complex motor response and several cognitive processes which make it very difficult to locate a specific brain region that is responsible for it. In this sense it would appear that pleasure requires a lot of effort from nearly every part of the brain whereas negative emotions require much less effort from more specific evolutionary regions such as the hypothalamus. It could be suggested that negative emotions do prevail over positive emotions which is why mood disorders such as depression exist. Going back to Charles Darwin, the possibility that positive emotional states evolved to counter-balance the prevalence of negative emotions would make sense. The pursuit of happiness is now becoming more common as more people are setting out in life not to be rich or have a respectful job but to be simply happy; a life well lived. However, happiness is not as easy to obtain and even maintain as people would like to think but is instead a complex cognitive state that requires a great deal of effort and is influenced by countless various factors. It was the Austrian psychotherapist Viktor Frankl who once said that a life devoted to the 'pleasure principle' could only ever have a thin and depleted consciousness. This suggests that the pursuit of pleasure does not always yield the desired results, but can in fact have detrimental effects. It would seem that in order to achieve a happy state one must aim for more than happiness. Frankl wrote 'What man actually needs is not a tensionless state but rather the striving and struggling for a worthwhile goal, a freely chosen task...' Don't aim to achieve happiness, aim to simply achieve. However, a point that requires attention and is possible the most influential factor in pleasure obtainment is the simple fact of individual differences; what one person would gain pleasure from doesn't necessarily mean someone else would acquire just as much (if any) pleasure in the same thing. ...read more.