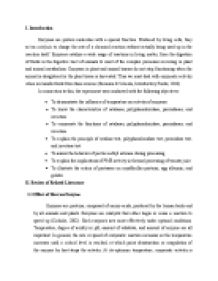 Food Science -Experiments to Determine the Properties and Uses of Enzymes in Food Preperation.

﻿I. Introduction Enzymes are protein molecules with a special function. Produced by living cells, they act as catalysts to change the rate of a chemical reaction without actually being used up in the reaction itself. Enzymes catalyze a wide range of reactions in living matter, from the digestion of foods in the digestive tract of animals to most of the complex processes occurring in plant and animal metabolism. Enzymes in plant and animal tissues do not stop functioning when the animal is slaughtered or the plant tissue is harvested. Thus we must deal with enzymatic activity when we handle foods from these sources (Bennion & Scheule, Introductory Foods, 2010). In connection to this, the experiment was conducted with the following objectives: 1. To demonstrate the influence of temperature on activity of enzymes 2. To know the characteristics of catalases, polyphenoloxidase, peroxidases, and invertase 3. To enumerate the functions of catalases, polyphenoloxidase, peroxidases, and invertase 4. To explain the principle of catalase test, polyphenoloxidase test, peroxidase test, and invertase test 5. To assess the behavior of pectin methyl esterase during processing 6. To explain the implications of PME activity in thermal processing of tomato juice 7. To illustrate the action of proteases on myofibrillar proteins, egg albumin, and gelatin II. Review of Related Literature 1.1 Effect of Heat on Enzyme Enzymes are proteins, composed of amino acids, produced by the human body and by all animals and plants. Enzymes are catalysts that either begin or cause a reaction to speed up (Cichoke, 2002). Each enzymes acts most effectively under optimal conditions. Temperature, degree of acidity or pH, amount of substrate, and amount of enzyme are all important. In general, the rate or speed of enzymatic reaction increases as the temperature increases until a critical level is reached, at which point denaturation or coagulation of the enzyme by heat stops the activity. At its optimum temperature, enzymatic activity is greatest, and denature does not occur (Bennion and Scheule, 2010). ...read more.

III. Materials and Methods- 1.1 Effect of Heat on Enzyme In this experiment, apples (purchased at SM supermarket), beakers, distilled water, thermometer, Bunsen burner and tripod set up and paper towels are used. Distilled water (500ml) was heated to 100°C. Apples bought from Supermarket were cut into cubes 0.5 inches at all sides then 25 slices of apple cubes was submerged into the heated water and samples were removed after 0, 10, 20, 30, 40, 50, 60 and 70 seconds respectively. After heating, apples were submerged in cold water to cool. And then apples were placed in paper towels. Time of browning was noted, and then heating time versus time of browning was plotted. 1.2 Catalase The materials used for this experiment are: One potato (bought in SM Supermarket), two test tubes, distilled water (bought in SM Supermarket), knife, ruler, chopping board, beaker, bunsen burner and tripod setup, and 3% Hydrogen Peroxide solution. The first step in conducting the experiment was the cutting of potato in uniform sizes. The dimensions of the potato were 0.5 inches, thus making a cube, having equal measurements at all sides. This was done until a total of ten potato cubes were cut. The next step was the submersion of 5 slices in boiling water for five minutes. This was considered as Lot A. The rest of the potato cubes were left unheated. Afterwards, the two test tubes were filled approximately 1/3 full with fresh Hydrogen Peroxide solution. Lastly, Lot A and Lot B were then placed inside the two test tubes separately. Results and observations were taken down respectively after completion. 1.3 Polyphenoloxidase The materials used include one potato, test tubes, distilled water, cheesecloth, thermometer, Bunsen burner and tripod, 0.1% Catechol solution, and beakers. Fifteen grams of potatoes were cut and blended with 100 ml distilled water. Then, filter was extracted through the cheesecloth. The collected filtrate was divided into two lots. ...read more.

The reason why the marbles placed on top of the gelatin slowly moved in through the gelatin is that these proteases already acted upon the gelatin which is a protein made from collagen (Science Buddies, 2012). The gelatin couldn?t completely hold its shape anymore and resist the force from the marble because the proteases were able to cleave the long gelatin molecules into shorter polypeptides (McWilliams, 2008). The helical structure, which is responsible for trapping water molecules and forming gels, was partially broken down into simpler molecules (Bullerwell and Hagar,2012). The hydrogen bonding that took place between the water molecules and the peptide links or the amino and carboxyl groups on the side chain, started to be chopped into pieces which are far too short to tangle (Gaman and Sherrington, 1989). The gel forming properties of the gelatin were already weakened by the enzymes present in fresh juice (Birch et al, 1977). Nothing happened in Lot D considering no enzymes acted upon the protein substrate. Table 9. Effect of Proteases on Gelatin Observations Lot A (Papaya) Lot B (Pineapple) Lot C (Kiwi) Lot D (Control) The marble was in the upper inside of the gelatin. The marble was in the upper inside of the gelatin. The marble was in the upper inside of the gelatin. The marble remained on the top most of the gelatin. V. Conclusion and Recommendations It can be concluded that enzymes are a major consideration when dealing with food. The rate of enzyme activity is generally affected by temperature, pH, and amount and type of substrate. Specific enzymes act on specific substrates. The effects of enzyme on food may be desirable, such as the tenderizing of meat, or undesirable, such as the hydrolyzation of gelatin. When dealing with enzymes, certain precautions must be taken. It is recommended to soak the apples in water to prevent enzymatic browning from occurring. It is also recommended to closely monitor pH and temperature since some enzymes are easily inactivated at low pH, like peroxidase, and at high pH, such as Papain. VII. ...read more.