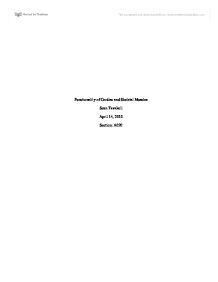 Functionality of Cardiac and Skeletal Muscles

Functionality of Cardiac and Skeletal Muscles Sean Tavakoli April 14, 2010 Section: A020 Abstract: Lab exercises 8 and 9 were performed to learn about the physiological properties of skeletal and cardiac muscles. In lab exercise 8, the gastrocnemius muscle was isolated from a bullfrog and several experiments were performed with a kymograph to test the effect of stimulus intensity on a muscle, the timing of muscular contraction, and testing titanic contraction. In lab exercise 9, a bullfrog heart was used to understand the properties of cardiac muscle. Cardiac muscle is very unique, because it can only be found in the heart organ. Experiments in lab exercise 9 included controlling the heart rate with four different agents: adrenalin, cold ringer's solution, warm ringer's solution, and acetylcholine. Additionally, the initiation and transmission of cardiac contraction was tested by stopping the SA node and finally looking at the reaction properties of cardiac muscle with the assistance of a kymograph (Stefaniak pg 84). Introduction: Skeletal and Cardiac muscles can be very similar. They possess the ability to contract due to the actin and myosin sliding filaments, which is a trait in every type of muscle tissue. They are also both striated and when stimulated, can cause action potentials. ...read more.

A baseline heart rate should be recorded on to the kymograph paper that can be used as a comparison to the heart rates after adrenaline or acetylcholine has been added. The kymograph must be adjusted so that one full rotation will equal one minute. This is to measure the amount of heart beats per minute. Record the baseline heart rate and then add three drops of adrenalin to the sinus venosus area of the heart. After the data has been recorded wash off the adrenalin with room temperature ringer's solution. Then record another baseline tracing and afterward apply 20 drops of acetylcholine directly to the heart (Stefaniak pg 93). Hypothesis 4: The materials used to test this hypothesis are ring stand clamps, insect hook, a kymograph, kymograph paper, a ring stand, electrode and stimulator, a functional bullfrog heart, a heart lever, thread, and clay. These materials should have the same setup in hypothesis three, but no acetylcholine or adrenaline should be used. Instead hook an electrode that is connected to a stimulator to an isolated heart which is no longer beating. The settings for the stimulator are: the mode is set to off, the events/sec should not be used, and the duration set to .2 ms. ...read more.

During the lab, the heart rate increased instead of having an expected decrease. The results for hypothesis four show that as the stimuli intensity increased, the force of the cardiac contractions stayed the same. The kymograph paper showed that the amplitude, when the heart was stimulated with various amounts of volts, all measured out to 20 mm. The heart would not contract any harder or any lighter after it passed the subthreshold value. This can be explained by the fact that cardiac muscles have relatively long refractory periods that are much longer than that of skeletal muscles. In order for stronger contractions to occur, the intervals of time for the stimuli shocks have to be slightly greater than that of the refractory period. However, a situation like that to occur to cardiac muscle on a normal daily basis is highly unlikely (Johnson). Acknowledgements: I would like to thank my teaching assistant, Dean Able, for helping explain to me each of the lab procedures of how to dissect and isolate the frog calf muscle as well as explain about action potentials to me. My lab partners Scott Hoover, Alex Laffoon, and Christian Erickson, were also a great help to me and without them experiment exercises 8 and 9 would be of greater difficulty to complete. Together, all of us were able to actively engage in the labs and understand very important muscle and contraction concepts. ...read more.