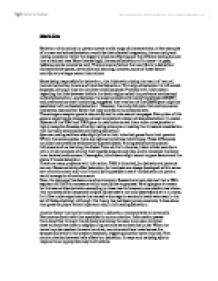 Genes being responsible for behaviour, that is behaviour being the result of 'nature', include instinctive, innate and inherited behaviour. Virtually, all behaviour is influenced by genes, although they are not determined by genes

Mark Lim Behaviour of an animal or person covers a wide range of characteristics. A few examples of human and animal behaviour would be that of social integration, the courtship and mating process or rather the stages to produce offspring and the different calling sounds that an animal uses. More interestingly, the s****l behaviour of humans- i.e. gays, lesbians, can be covered as well. There are some factors that contribute to behaviour characteristics- genes, nerve cells and learning, however, some of these factors contribute to a larger extent than others. Genes being responsible for behaviour, that is behaviour being the result of 'nature', include instinctive, innate and inherited behaviour. Virtually, all behaviour is influenced by genes, although they are not determined by genes. Provided with information regarding the links between deficits in a brain region called the prefrontal cortical and antisocial behaviour, and between the enzyme catechol O-methyltransferase (COMT) and prefrontal cortical functioning, suggested that a variant of the COMT gene might be associated with antisocial behaviour. However, the study did state that environmental interaction was another factor that may contribute to antisocial acts. ...read more.

Now, the 'gay gene' has been one of controversy. Researchers have claimed that a DNA segment on the X chromosome which contributes to gayness. No single gene is reason for this s****l disorientation according to these results however a correlation has shown that homosexuality has genetic origins. Queerness is not only observable just in humans, fruit flies under experiments that caused a shortage in serotonin levels were seen in the act of 'daisy-chaining'. Although this theory has not been proven concrete, it does show that genes do play a rather important role, in influencing behaviour. Another factor that has its involvement in behaviour characteristics is nerve cells. Neurons are brain cells that specialise in communication. Information passes from dendrites through the cell body and along the axon to an axon terminal close to dendrites close to neighbouring neurons as an electrical pulse. When the nerve impulse reaches the axon terminal, neurotransmitters travel across the synapse and stick to the present receptors, triggering another nerve impulse. This communication between cells affects our behaviour in ways such as being able to respond in an appropriate way to situations. ...read more.

Animal cries are also a product of nurturing. Infants observe their parents' and notice that when a certain predator is lurking, a warning cry is heard, which is different to a call that signifies the presence of food. The trial and error technique is also part of the learning process and animals learn to differentiate between harmless and dangerous situations. Infants who spend more time on a jungle gym than in a playpen learn more and thus develop their brain cortex further, improving their logic. Interaction with other infants would also discourage anti-social characteristics. If parents are consensual, their infant can be brought up with a gay childhood and thus will not have to inherit the fruitless gene that apparently results in homosexuality. If not, he can be brought up along the straight, narrow path and reproduce in a healthy relationship involving a female. Thus, the learning process has a large extent in being responsible for behaviour. However, not one factor determines behaviour traits but rather they act together to influence the way in which the person, or animal, behaves. ...read more.